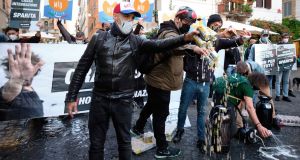 People spill beer on the ground during a protest against government restrictions to curb the spread of Covid-19, in Rome on Saturday. Photograph: Mauro Scrobogna/LaPresse via AP

The governments of Italy and Spain, the European countries hardest hit by the first wave of the coronavirus pandemic, announced sweeping measures on Sunday to combat a surge in the number of new cases.

Italy said it would introduce the harshest public health restrictions since the end of its first national lockdown in May as new coronavirus cases hit a fresh daily record. Spain announced a nationwide curfew and triggered emergency powers after the country’s infection rate jumped by almost a third over the past week.

Giuseppe Conte, Italian prime minister, said that starting from Monday all bars and restaurants across the country would have to close by 6pm. Under the proposed measures, to remain in place for a month, schools and workplaces will remain open.

Gyms, swimming pools, theatres and cinemas will close, and Italians are “strongly recommended” not to leave their immediate areas apart from for studying, work or health reasons.

“The stress on the national health system has reached worrying levels,” Mr Conte said in a televised address announcing the new measures.

Spanish prime minister Pedro Sánchez said the nationwide curfew between 11pm and 6am would be imposed immediately, following requests by 10 of the country’s 17 regions.

He said the government would activate a so-called state of alert – which grants the state emergency powers – to permit the curfew, allow territorial restrictions and ban meetings of more than six people across the country. He added that he would seek parliamentary approval this week from all of Spain’s political parties to prolong the extraordinary legal order until May 9th.

Inside Politics · A dramatic week in Covid, Brexit and the US election

“All of Europe is now taking measures to limit mobility and personal contacts,” Mr Sánchez said. “We have never confronted something like this as a society before.”

Mr Sánchez previously invoked a state of alert in March, in response to the first wave. But the measure lapsed in June, after it became increasingly difficult to win parliamentary support, which the government then sought at two weekly intervals. Some of the country’s regions also pushed hard for restrictions to be lifted more quickly.

The Spanish premier said that the new state of alert would differ from the previous measure because the emergency powers would be wielded by regional administrations. He added that the government sought to avoid another nationwide lockdown, as was imposed during the first wave, but pleaded with citizens to stay at home as much as possible to keep infections under control.

In Italy, Mr Conte has so far insisted that there will not be a new national lockdown, despite newly diagnosed Covid-19 cases surging over the past two weeks.

Italian authorities said on Saturday that confirmed new cases had risen by 19,664 in 24 hours, a new daily record, while 151 people had died, up from 91 a day earlier. The number of Covid-19 patients in intensive care rose by 79 to 1,128.

As Mr Conte held a government meeting on Saturday, a small group of protesters, some linked to neo-fascist groups, threw firecrackers at police in Rome’s central Piazza del Popolo in the latest sign of public unrest triggered by the prospect of new restrictions.

The previous evening, violent protests had broken out in Naples after the governor of Campania, the region that contains the southern city, said a surge in cases there meant that his regional government would have to impose new lockdown measures.

“We have to close everything, except for businesses that produce and transport essential goods,” Vincenzo De Luca said in comments that provoked the protests. “We are on the verge of tragedy,” he said, urging the whole of Italy to go into a new lockdown.

On Saturday evening Mr De Luca appeared to roll back from his previous comments, saying there would be no full lockdown in Campania, but urged the national government to impose a “red zone” around Naples, stopping movement in and out of the city.

Cases in Italy’s south have risen sharply in the past week, raising concern among officials that the region’s weaker public healthcare system could struggle to cope if the infection rate continued to increase.

During Italy’s first wave, the country’s poorer south was largely spared any significant outbreaks, which were concentrated in the wealthy northern region of Lombardy, but Campania has since the end of the summer become one of the worst-hit areas. – Copyright The Financial Times Limited 2020