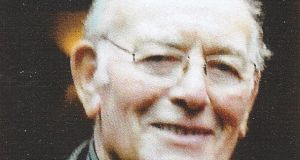 Frank Ginty: brought more than good looks, good humour and strength to Birmingham from Mayo when he arrived in 1955. 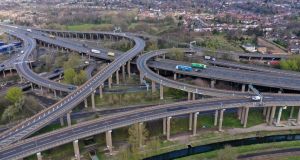 This is for Uncle Frank. It is his diary, so it is really an Irishman’s Diary, not an Irishwoman’s diary. Yes, I wrote it. It is my byline, but it is his story. Frank and I are embracing gender fluidity. I would share that experience with him – if I could.

As The Irish Times is a paper of record, it seems fitting that it should record Frank Ginty’s 83 years on the planet in 2020, the year of his death.

I remember Frank reading the Irish Post at my grandparents’ kitchen table in Kings Heath, Birmingham. In the days before the internet, when print was king, he would prise a copy of the Western People, the weekly newspaper published in Ballina, Co Mayo, from the wire racks of newsagents in the English midlands. He would read it and breathe in some news from home, see who had died, who had won a GAA match and by how many points. Frank had left Mayo, but Mayo had not left him. People still died. Goals were still scored. He still wanted to know – wherever he was.

He brought more than good looks, good humour and strength to Birmingham from Mayo when he arrived in 1955. The Irish electricity board, where he had got a job, would have to carry on without him. Of his almost Biblical five sisters and five brothers, Frank was the 10th. Born in 1936, he grew up in Bonniconlon, Co Mayo, but moved to Birmingham. He had heard that the opportunities for work and for dancing were better there.

Frank was a good dancer. He met my Auntie Pat at a dance in 1958. They got married two years later and went on to have three children. They carried on dancing – quick, quick, slow – all their lives. They were good. People watched.

It was amazing what the people you walked amongst got up to when you were preoccupied with strawberry bootlaces, sherbet fountains and your scabs. Frank was just our uncle. We knew he fixed the steel that backboned buildings because we saw the cards he gave out for his steel-fixing business lined up neatly on his telephone table, yet we didn’t know that Uncle Frank had quietly built the Bank of England in Birmingham’s Colmore Row and the city’s futuristic Central Library and Birmingham School of Music when we weren’t looking. Obviously Frank had help doing that, but still.

Frank led the steel reinforcement of Birmingham’s Queensway tunnel, relishing the impressive deep tunnelling machines and telling tales of their engineering mastery. He worked on the Lloyds Bank building there, Birmingham’s Masonic temple and Spaghetti Junction. Yes, that Spaghetti Junction. As far as I am concerned, Uncle Frank built Birmingham. He also made and erected the steel for some of the bypasses, bridges and motorways that made Britain great again. Ironic for an Irishman.

And all the time he was building bridges, Frank Ginty managed to play with his children, feed the thousand pigs on his farm, keep turkeys, horses and excited sheepdogs in what I thought was the country, but turned out to be a farm just off the motorway on the way in to Birmingham.

Did I mention that he played the mouth organ, regaled people with jokes, wore the colour purple like a dude and that his grandchildren and great-grandson loved him? In fact everybody loved him. All in all, a good life’s work, Frank.

Frank Ginty deserved having his determined wife drive to a Birmingham hospital behind his ambulance in the time of coronavirus to spend the night by his side. This mature woman stayed with him, wearing full personal protective equipment, grabbing the odd moment of sleep on a bed on the floor next to him in his single room until the doctors told her she had to leave. She stayed for longer than anyone thought she would be able to, though.

The nurses were so kind, she said. He rallied. Well, you would too if you had Pat in your corner.

In these tough times of corona virus, so many people have died from so many things, and they have died on their own away from their loved ones. As he took his last breaths, the nurses were with Frank, accompanying this super-strong man at his weakest time on this most important journey. The healthcare professionals with the building professional. Karma.

They said goodbye to Frances Joseph Ginty at Redditch Crematorium earlier this year.

His youngest child Michelle remembered the valued lessons he had taught her. “One of the things I learned as a child from dad was the ability to overcome prejudice. He buffered us from any potential anti-Irish feeling,” she said.

Not bad for a man from rural Mayo who made a proud mark on England’s second city. Think of Frank when you next drive over Spaghetti Junction. He would have liked that.