Selling PPE as an excuse to keep businesses open ‘not lawful’, Varadkar says 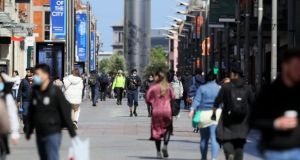 Gardaí will take action against retailers selling facemasks or other personal protective equipment (PPE) as an excuse to keep their businesses open during the Level 5 lockdown, Tánaiste Leo Varadkar has said.

There has been mounting frustration in recent days that some retailers, such as clothes or shoe shops, have begun stocking and selling PPE or other essential items so they will not have to close down.

There has also been confusion about the power of the Garda to take action against such businesses.

It was reported on Sunday that the Government has received legal advice that such premises cannot be shut down under the current Covid-19 legislation.

Speaking on RTÉ’s This Week on Sunday, Mr Varadkar said selling non-essential items alongside essential goods is “not lawful”.

“So for example if you are a supermarket or a big store that has groceries or clothes you should separate off the clothes and not sell them. Workwear is ok but general clothing is not.”

He said the Government has been in contact with gardaí on the issue and that the regulations “will be enforced”.

“Think of all the small shops and retail outlets that have had to close. It would be unfair for those allowed to stay open to somehow take advantage and it won’t be allowed,” Mr Varadkar said.

A Garda spokesman said on Sunday the latest emergency Covid-19 powers passed on October 22nd grant it the power to enforce action in relation to the “carrying on or provision of certain businesses or services”.

“This is a penal regulation and can be enforced in accordance with section 31 (a), The Health Act 1947 as amended.”

He said the Garda will continue “to carry out inspections on business premises to ensure compliance with public health guidelines and regulations.

“An Garda Síochána will continue to use the 4 Es approach of engage, explain and encourage, and only where provided for and as a last resort, enforcement.”

The Garda also tweeted on Sunday afternoon that it is checking the compliance of retail outlets and that regulations “are being enforced.”