Chris Johns: ‘Rolling lockdown’ until a vaccine arrives is an abject failure of policy 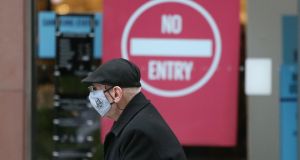 A closed shop on Dublin’s Henry Street. Official policy represents a gamble. The main bet is that we won’t have to wait too long before a vaccine arrives. Photograph: Nick Bradshaw

Conventional wisdom has rarely changed so quickly. This needs to be remembered when trying to figure out what happens next.

These promises were made in plenty of countries, not just Ireland. Their failure to be honoured could be evidence of abject state failure. It might be that they were just hopelessly unrealistic promises in the first place.

One thing is for sure, the more certain anyone is about this virus the less they should be trusted.

That said, we can say one of two things that are evidence-based or objectively true.

First and foremost, lockdown represents failure. It is the result of failure to manage the pandemic. We disagree about what “manage” means but whether you are a suppressionist or an abolitionist, you will agree that the public health managers have failed to deal with the virus. It is, however, unlikely that the future will be characterised by accountability. Again, not just in Ireland.

We now know official policy is to implement rolling lockdowns until the vaccine or divine providence intervenes. Official World Health Organisation (WHO) advice includes lockdown in the policy toolkit, but only as a second line of defence. Lockdown, according to the WHO, should only be used to buy the time necessary to get testing and tracing in order (sound familiar?).

Official policy represents a gamble. The main bet is that we won’t have to wait for too long before the vaccine arrives. How long is too long? Do enough lockdowns and their associated costs - jobs, incomes, mental health, cancer and other non-Covid illnesses - will be greater than the costs of lives saved during those lockdowns. There are other costs to be added to that brutal calculus: societal fractures are being opened up by those willing and able to exploit the stresses created by the pandemic. Who knew Ireland also has its own far right-wing nuts?

Gamblers can get lucky. That vaccine may well arrive soon. The second lockdown could be the last. The tentative evidence from Israel, first in the world into the second lockdown, is that it can produce surprising results. The Israelis are, initially at least, seeing a faster fall in cases than during the first lockdown. It’s important to acknowledge the good news, such as it is.

“Rolling lockdown until the vaccine” isn’t just policy in Ireland. It’s explicit in Wales and elsewhere. (That doesn’t include England: I’ve no idea what official policy is there.) Some officials and health experts think rolling lockdowns make sense. Most, it seems to me, do not.

All experts, as far as I can tell, do agree on one thing: without proper testing, tracing and isolation, whatever policy you try stands a very high risk of failure.

Failure can take many forms, but it will ultimately come down to the costs of the policies we follow versus the ones we didn’t. We will argue forever about that, even more than we still do about the costs of the financial crisis. What would have happened if we hadn’t bailed out all the banks?

But in that argument about numbers, remember the basic point: policy failed during that banking crisis and it has failed – is failing – again.

“Rolling lockdown” until the vaccine arrives is, in my view, an abject failure of policy. It is not evidence-based or supported by majority expert opinion. If we don’t get lucky we risk devastating economic hardship for significant sectors and regions of our economy. Even if we do get lucky we need to make sure that we never respond in this fashion again.

Policymakers said “never again” after the banking crisis. We need to do the same once the pandemic is behind us.

My colleague, Cliff Taylor, has written eloquently about the surprising and unexpected ways different parts of the economy have, or have not, been impacted by the pandemic. That connects to other divides that are made worse by the virus. Smaller companies face a disproportionate hit; the rural/urban and public/private divides risk widening further; workers from home see their lives enhanced; hourly paid caterers are crushed; inequality, via all these routes, will worsen.

We are subjected to daily exhortations to change our behaviour. Public health experts exhort because they don’t understand economics. Economists might not know much but they are intimate with the role that incentives play in human behaviour.

Nobel prizewinner Paul Romer suggests we offer a $1 billion cash incentive to any lab that can process a million Covid tests a day. Romer believes, with much justification in my view, that mass testing is one way we can restore some semblance of economic and social normality. That prize suggestion has not been taken up anywhere: public health experts have told me it is too expensive an idea. That’s because public health officials don’t understand opportunity cost or cost/benefit analysis.

Nobody thinks any of this is easy. But alternatives are out there, exemplified by the few countries that have had better (not perfect) outcomes and policy suggestions from the likes of Romer.