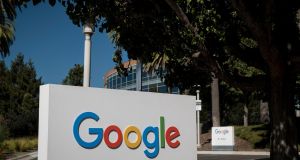 Google stands accused of creating a monopoly, and thus harming consumers, by controlling 90 per cent of the online search and advertising market. Photograph: David Paul Morris/Bloomberg

With the US Justice Department’s announcement last week that it is preparing an antitrust suit against Google, a significant moment of reckoning has arrived not just for Google, but for all of Big Tech.

Google stands accused of creating a monopoly, and thus harming consumers, by controlling 90 per cent of the online search and advertising market. The suit states that Google, owned by parent company Alphabet and its cash cow, has deals with device makers (including Apple), to make Google the default search engine. Between them, Apple’s iOS and Google’s own Android operating system run on most of the world’s devices.

Yet the Justice Department has sat on its powers to use the antitrust Sherman Act, created in 1890, for decades. It was last put to use, against Microsoft, in a ground-breaking trial that began before Google was even founded. Microsoft was ultimately found guilty of illegally tying its new Internet Explorer browser to its Windows operating system, then in use on most home computers, and of pressuring manufacturers to make Internet Explorer the default browser.

The Act then fell into disuse, even as a roster of the most powerful companies the world has ever seen either came into being, or grew ever larger and more dominant. While such companies nominally fall into the tech category, they are in truth sector-spanning, a muscular blend of technology, entertainment, electronics, retail, and advertising, and variously dabbling beyond into areas such as automobiles, energy, fitness and health, security, and more.

A good portion of this endless expansion has come from acquisitions. Google picked up Android in 2005, and digital advertising giant DoubleClick in 2007. Those two acquisitions forged the search advertising behemoth now being sued. The sector knows well that public and government sentiment internationally has turned against blindly cheering on tech titans. The Justice Department suit comes a week after the House Judiciary Committee published a blistering report calling for antitrust action against Big Tech. More legal actions are expected. But regulators and lawmakers globally must ensure any actions are carefully constructed and well-evidenced – and consider whether new antitrust legislation is needed, better fit for the age of tech, as well as more stringent regulatory action, taken before the companies veer into market control.

The jury is still out on the effectiveness of that Microsoft case. And Windows, don’t forget, remains the world’s dominant computer operating system.