Covid-19: Public urged to ‘stay at home’ as 1,025 further cases confirmed in State

US infectious disease expert Anthony Fauci has said that it would be clear whether a COVID-19 vaccine was safe and effective by early December, but that widespread vaccination would not be likely until later in 2021. Video: Andrew Marr Show / BBC 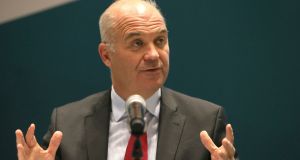 Dr Tony Holohan, chief medical officer at the Department of Health, on Sunday urged people to stay at home, unless for essential reasons or for exercise. Photograph: Stephen Collins/Collins.

A further 1,025 cases of Covid-19 and no additional deaths have been recorded in the State, the Department of Health has said.

In a statement on Sunday evening, the department said a total of 57,128 cases have now been confirmed in Ireland and 1,882 people with the disease have died.

A total of 315 people with the disease are currently in the State’s hospitals, with 38 in intensive care units. The department said there had been 16 additional hospitalisations in the past 24 hours.

Chief medical officer Dr Tony Holohan said: “If you’re a confirmed case, have had a test or have symptoms of Covid-19, you must self-isolate for 10 days.

“If you live with a case or have been told you’re a close contact, you must restrict your movements for 14 days. Everyone else should stay at home, unless for essential reasons or for exercise within 5km of where you live.”

Northern Ireland’s Department of Health on Sunday said there had been six further Covid-19 linked deaths in the previous 24-hour reporting period and 923 more cases. The death toll recorded by the department now stands at 645 and there have been 33,209 confirmed cases in the North. There are currently 309 patients with Covid-19 being treated in Northern Irish hospitals, with 34 people in intensive care.

A number of key indicators relating to the spread of Covid-19 in the State have levelled off in recent days.

The proportion of people testing positive, along with the number of close contacts per person - important indicators of the rate of transmission of the disease in the community - have fallen.

HSE chief executive Paul Reid on Sunday morning noted the eight-day fall in the positivity rate for tests, which on Saturday stood at 6.2 per cent for the previous seven days.

Mr Reid also noted a fall in the number of close contacts, down from 4½ per confrimed case to three.

“Most close contacts are household. Still very early but good. We’re all be part of the solution. Let’s keep this going,” he said on Twitter.

Officials caution against reading too much into single-day figures but the improvements seen across a range of indicators point to some stabilisation of the situation.

Tánaiste Leo Varadkar told RTÉ’s This Week that while it is “early days”, the Level 3 restrictions put in place in early October “are starting to have an effect”.

“You know we’re seeing the number of cases level off and the positivity rate fall. It is early days yet though, and we’ve yet to see what the effect of the Level 5 measures is, we won’t really know that until really November sometime.”

Mr Varadkar said the Government is “increasingly optimistic” that it will be possible to start vaccinating those most at risk from Covid-19 “in the first half if not first quarter of next year”.

He said he is confident that Ireland can move to “Level 3 and a bit” in December. “But at the same time, we need to not be complacent.”

The Government’s strategy is, he said, “to delay the virus to slow it down until such a time as a vaccine available”. Mr Varadkar said it is not inevitable that Ireland will be back in Level 5 in the New Year.

Meanwhile, Mr Reid said a “vast majority” of the almost 2,000 confirmed Covid-19 cases who were asked to do their own contact tracing last weekend had only reported having household contacts.

The HSE’s contract tracing system collapsed last week due to a sudden surge in cases and a lack of staff to deal with them. As a result, thousands of people who had tested positive for the virus were asked to ring their own contacts in order to prevent a backlog of contact tracing calls.

Mr Reid told Newstalk that what happened last week “shouldn’t have happened to the extent that it happened”.

“In essence what caught up last weekend was an absolute uncontrolled levels in the community.”

He added: “What we are seeing is calls taking significantly longer, probably double the time they were taking at the start of this, more volume of calls [SIC]and more complex calls that we’re having to make as well.”

Mr Reid added that he regrets what happened last weekend, adding that the HSE “fixed it”.

“What we did during the summer was four things. Firstly build up the number of community testing centres and recruited workers to do that, secondly improved the logistics of the transfer of those swabs to more efficient testing, thirdly built up our lab capacity to now over 120,000 and we building more over the coming weeks and finally the recruitment of tracers,” he said.