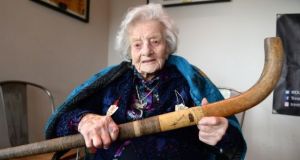 Dorothea Findlater at the presentation of the Wheeler Plate after the inaugural match, earlier this year. She became an Irish hockey international, winning her first cap in 1936. She also represented Ireland at golf. Photograph: Cyril Byrne

Sir, – It was with great sadness that I read of the passing of Mrs Dorothea Findlater at the grand age of 107 (“Daughter of British captain who accepted Pearse’s surrender dies aged 107”, News, November 21st).

I had the pleasure of working with Dorothea during the launch of Census 2016. She had a sharp memory. She demonstrated this sharpness when recounting the night she climbed the Curragh water tower with her mother and governess to see the glowing red of Dublin City burning in the distance.

It is not often that one is lucky enough to meet a person older than the State, let alone somebody for whom the 1916 Rising was in living memory.

She was a wonderful lady and I am happy to have had the honour of meeting her. May she rest in peace. – Yours, etc,

Sir, – You are incorrect in stating that Capt Harry de Courcy-Wheeler is “pictured opposite Patrick Pearse in the famous, grainy picture of the surrender” (November 21st). While de Courcy-Wheeler was present at the 1916 surrender, the British officers facing Pearse in the famous photograph are in fact Brig-Gen William Lowe and his son and aide de camp Lieut John Lowe. The latter became a Hollywood star under the name John Loder and married Hedy Lamarr. – Yours, etc,