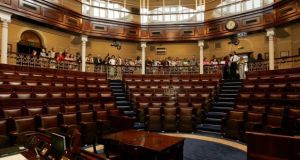 A chara, – The silence from the trade union movement in response to the publication of the Public Service Pay and Pensions Bill 2017 is remarkable. This legislation, which will be debated in the Dáil this week, gives effect to the Public Services Stability Agreement (PSSA). It will compound and continue pay inequality for post-2011 public servants, including teachers. It will lead, as your news paper reported (“TDs and public servants to have pay cuts reversed”, News, November 9th), to the net pay for most public servants being reduced “through the conversion of the pension levy . . . into a permanent pension contribution”.

The three teacher unions voted to reject the PSSA. They did so mainly because it does not reverse pay inequality and specifically provides that no change can occur to deliver equal pay for the duration of the agreement. Teachers appointed in 2011 have already lost over €26,000 in earnings in addition to the paycuts imposed on their more senior colleagues. There is no doubt that this inequality in pay is one of the reasons for the current acute crisis in teacher supply. This legislation, if passed in its current form, will be used to try to prevent teacher unions from taking effective action to deliver equal pay during the lifetime of the PSSA. This is because of the sanctions contained in the legislation for unions who do not assent to the PSSA.

Members of unions who do not assent will, among other measures, have increments frozen until 2021 and will face the effective continuation of the pension levy for two extra years. The intent of this is to force unions that did not accept the agreement to assent to it, ignore the democratic wishes of their members and abandon any effective campaign to progress the just cause of lower-paid teachers and lecturers. The legislation represents a fundamental attack on trade union rights. The democratic rights of union members to engage in free collective bargaining is being undermined. The right of members to say no to an unjust agreement is being denied.

It should be noted that this legislation provides provision to allow for the eventual full restoration of the inflated pensions of those responsible for the economic crash yet does not provide any pathway to equal pay for lower-paid teachers and lecturers.

We are calling on all trade unionists, particularly the leaders of teacher unions, to demand that the oppressive measures in this legislation be removed and that it be amended to provide for equal pay now. – Yours, etc,

1 ‘He was some man’: Shane’s journey from care child to fearless activist
2 Mary Lou has to call for the smelling salts as SF councillor deals a knock-out blow
3 Netflix: The best 101 films to watch right now
4 Chris Hadfield on the climate crisis: ‘The world has seen much, much worse’
5 Fine Gael deletes spoof election video after negative response
Real news has value SUBSCRIBE