Standing on the summit of the Curragh’s Victorian red-brick water tower with her mother, six-year-old Dorothea Findlater could see Dublin burning. Her father, a British army officer, was somewhere in the thick of it. 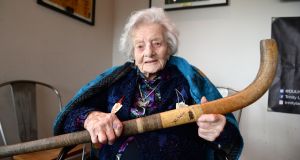 Dorothea Findlater at the presentation of the Wheeler Plate after the inaugural match, earlier this year. She became an Irish hockey international, winning her first cap in 1936. She also represented Ireland at golf. Photograph: Cyril Byrne

Dorothea Findlater, who remembered seeing the flames as Dublin burned during the week of the Easter Rising, has died at the age of 107.

Her father, Capt Harry de Courcy-Wheeler, was present at the surrender of Patrick Pearse following the Rising.

Two years ago, she was one of the stars of the documentary film, Older than Ireland, which focused on several people over the age of 100. She would have been108 next month.

Ms Findlater died at 3am on Monday morning at Abilene, the family home in Blackrock, Co Dublin.

“She just quietly slipped away,” her eldest son, Alex, said. “She was a wonderful and loving mother and grandmother.”

She was born Dorothea de Courcy-Wheeler on December 27th, 1909. As a child of seven, she was taken by her mother to the top of the water tower in the Curragh Camp to see the flames of Dublin burning in the distance during Easter Week 1916.

In an interview with The Irish Times last year, she said: “I remembered climbing to the top of the tower in the Curragh with my mother and watching a mass of flames across the sky. The whole horizon was ablaze.”

Her father, Capt de Courcy-Wheeler, was the organiser of the Curragh Camp. During Easter Week 1916 he was appointed staff captain to Gen William Lowe for the duration of the Rising. In that capacity, de Courcy-Wheeler was pictured opposite Patrick Pearse in the famous, grainy picture of the surrender.

Despite his involvement in the Rising, there were no recriminations for her father after independence. He began a friendship with Éamon de Valera and Séan T O’Kelly, both Easter Week rebels who went on to become presidents of Ireland.

A graduate of Trinity in 1932, Ms Findlater met and married Dermot Findlater, one of a well-known family of Dublin merchants. He died in 1962.

She became an Irish hockey international, winning her first cap in 1936. She also represented Ireland at golf.

Earlier this year she presented the Wheeler Plate, named in her honour, to the winners of an annual hockey match between Trinity Ladies and a president’s alumni selection.

She is survived by four of her children: Alex, Grania, Suzanne and John. She had nine grandchildren and 10 great-grandchildren.