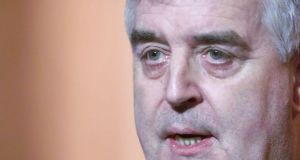 Sir, – I note that in recent days former unionist MP John Taylor (Lord Kilclooney) has suggested that Donegal should reenter the United Kingdom and thus take back its place in the historic province of Ulster. He may have more supporters for this seemingly harebrained idea than he thinks.

Believe it or not, as early as 1965 the unionist prime minister Terence O’Neill suggested (in jest) to taoiseach Sean Lemass at their historic Stormont meeting that Donegal might rejoin the UK. Lemass agreed as he felt it would get Neil Blaney off his hands. Somehow I do not see Lord Kilclooney and the Blaneys working well in harness together. Perhaps Lord Kilclooney should reconsider! – Yours, etc,