Parnell and the Manchester Martyrs 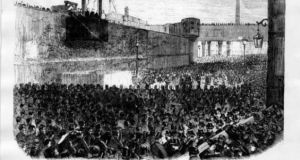 The Manchester Martyrs were executed on November 22nd, 1867

Sir, – As a postscript to Denis Fahey’s piece on the Manchester Martyrs (An Irishman’s Diary, November 20th), it was their execution 150 years ago “which was destined to turn Parnell’s thoughts fully to Irish politics”.

According to his friend and biographer, R Barry O’Brien (The Life of Charles Stewart Parnell), it was also his vehement objection to the description of them as “murderers” that formed “Parnell’s first really notable utterance in the House” during a Commons debate on the Irish Party’s Home Rule demand in 1876.

That intervention also brought the new Meath MP to the attention of the Fenians and began the groundwork for what became the New Departure, joining them and the land movement with the constitutional party in pursuit of Irish self-government. – Yours, etc,