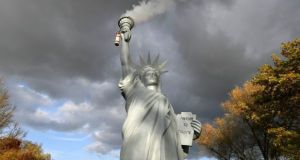 A replica of the Statue of Liberty by Danish artist Jens Galschiot emits smoke in a park outside the 23rd UN Conference of the Parties (COP) climate talks in Bonn. Photograph: Martin Meissner/AP

Sir, – In “Climate change: too little, too slow” (Editorial, November 20th), you rightly state that “the formation of an alliance to end coal power generation illustrates real action is possible within tight time-frames. For the UK the end comes by 2025. Ireland should join the group by saying when it will stop coal use at Moneypoint power station.”

Ireland has already stated that it will stop coal use at Moneypoint by 2025. The then-government stated the following in December 2015: “Before Moneypoint comes to the end of its operating life in its current configuration, in 2025, the most suitable replacement low-carbon generation technology will have to be identified. Key decisions on the future of Moneypoint will be taken before 2020 (Energy White Paper, Ireland’s Transition to a Low Carbon Energy Future).

Given that this it is stated government policy to replace coal at Moneypoint by 2025, it is all the more mystifying that the present Government has not joined with the 19 countries that last week established the “Powering Past Coal Alliance”. We should do so forthwith. – Yours, etc,