Holding the line on Brexit 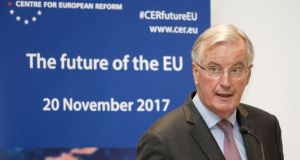 Sir, – On the post-Brexit border question, Alan Shatter writes, “our concerns can only be definitively addressed in the context of an agreement being reached on the nature of the UK’s post-Brexit trading relationship with the EU, including our State” (November 21st).

Failure to agree a clear, post-Brexit border solution in phase one of the negotiations risks relegating this issue to bargaining-chip status in the wider trading relationship talks. In this event, Ireland’s influence in affecting the outcome will have been totally ceded to the Brussels bureaucrats and the mandarins of Perfidious Albion.

The Taoiseach and the Minister for Foreign Affairs must “hold the line” for a phase one resolution. – Yours, etc,

Sir, – In casual reading I came across a quotation from Edmund Burke which might amuse your readers. Burke had realised early that the French Revolution was going to lead to disaster.

Even though the king and his family and many leading figures of the Ancien Régime had been driven by a mob of 60,000 from Versailles to Paris (October 1789), many British politicians were confident that order might be restored and a constitutional monarchy established. Burke thought otherwise. In February 1790 he said this in the House of Commons of the French people: “They now are lying in a sort of trance – an epileptic fit – exposed to the pity or derision of mankind, in wild ridiculous convulsive movements, impotent to every purpose but that of dashing out their brains against the pavement”.

That could be said today in the French Assembly, with some irony and risking hyperbole, about their neighbour north of the Channel. – Yours, etc,