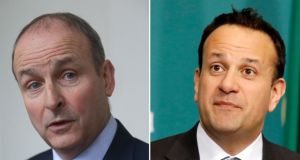 Are there any differences at all between Fianna Fáil and Fine Gael? Photograph: Damien Eagers/Leon Farrell/PA Wire

Everyone has won, and all must have prizes. So decreed the Dodo in Alice in Wonderland, after organising a “caucus-race” in which no one could figure out the winner.

Here in Coalition Wonderland, the race result was similarly inclusive.

A dozen distinctively glittering policies carefully divvied out (and equally carefully uncosted) to represent four “wins” per party in case one of them looked suspiciously dominant on the Six One.

The once and future Taoiseach looking particularly delighted, healthy and spiky haired, soaring in The Irish Times/MRBI opinion poll despite being written off by the entire country a few months back and most idiotically on Monday by that towering monument to western civilisation, the Daily Express.

The top Green negotiator whose agreement to her own agreement was never entirely assured until she had given the thumbs-up to her possibly-maybe agreeable party. And the incoming Taoiseach, the crown at last within his grasp – just for 30 months, mind – head swivelling between grave affairs of state, Éamon Ó Cuív and the FFWTF gang, while trying not to engage in the thing the media was trying to sound excited about, ie The End of Civil War Politics.

Yet the moment is worth something more solemn than a shrug, a shiver or a sneer. The Civil War was once described by Garret FitzGerald as a “dispute over the political status of our new State” from which “two main parties emerged which thereafter offered the Irish people a choice of government”. It was no mean achievement. Writing here in 1999, he reckoned it was half a century since the “dispute” had “ceased to have any relevance”, which probably said more about his world view than about any benign amnesia among the gentle populace.

But in Ireland this week as the two old parties hang together (for they would surely hang separately), old ghosts hover from another time; idealists, romantics, patriots, pragmatists, cold-blooded killers and ordinary thugs. We should at least be clear on their war, sacrifice and evolution because no one else will bother. Watch RTÉ’s documentary on the War of Independence on Wednesday night, with particular attention to Michael Portillo’s exploration of British government mindsets down the years.

Are there any differences at all between Fianna Fáil and Fine Gael?

Later the division between the two parties “centred not so much on socio-economic issues as on degrees of intensity of nationalism and, from the 1960s onwards, upon different degrees of sensitivity to issues of probity….”

Then, as FG turned towards pluralism in the 1970s, Fianna Fáil continued with its irredentist stance (ie reclaiming the six counties). FitzGerald suggests this may have been partly because Fianna Fáil’s leaders were conscious of the need in the national interest to maintain its traditional role of forming a mudguard against the IRA – by operating in such a way as to keep “republican-minded people within the constitutional fold”.

Note his line, “in the national interest”.

Then the arc flattens. FitzGerald notes the effective disappearance of ideological differences between the two parties’ economic policies.

The echo down the years is deafening. The failure to tackle problems, he said, was “alienating a large fraction of our population from our traditional political system, driving whole communities towards dependence on vigilantism and towards growing political support for Sinn Féin”.

This, remember, was more than 20 years ago.

He was very fearful of a mooted merger of FF and FG. And herein lies the lesson. Back in 1999, his fear was not about policy differences (clearly), nor about anything as trivial as a loss of party identity nor about the dilution of some Civil War scoresheet nor some 80-year-old atrocity perpetrated on an antecedent by the other side.

His concern was that instead of “alternating governments offering genuine policy choices about the distribution of national resources”, such a merger would yield a “monster” party with almost indefinite tenure.

But the fear of a FF-FG monolith no longer applies so what are we left with now? A coalition of three parties which between them garnered just over half the vote in February’s election – a mandate in anyone’s book – with aspirations that wouldn’t shame the Fairy Godmother. On the other side, a confident, energetic, numerically powerful opposition mainly of the left.

Few of its members have experience of government, but all have a duty to scrutinise and hold the administration to account while – hopefully – furthering democracy by advising errant supporters to knock off the bile and constitutionally ignorant #notmyTaoiseach nonsense. Rough times lie ahead for many of us. The Dodo is dead.

Garret FitzGerald saw the danger for his country 20 years ago. Today’s patriotic leaders will see new dangers wherever they look. They will tell their TDs to shelve the theatrics, cut out the nonsense, familiarise themselves with the Constitution and to remember, above all, the words of John Kenneth Galbraith: “Politics is not the art of the possible. It consists in choosing between the disastrous and the unpalatable.”