Bloomsday enthusiasts gather outside Davy Byrnes Pub In Dublin to commemorate the day with readings and recitals. The pub was visited regularly by James Joyce and features in both Ulysses and Dubliners. Video: Bryan O’Brien 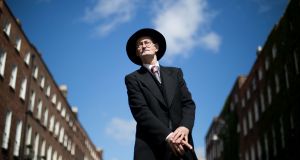 The lock-downs is beginning to lift in Ireland, but whither the arts, especially the performing arts on Bloomsday 2020? Theatres, concert halls and local arts festivals are unlikely to open for some time, at least at anything near normal capacity.

We should therefore heed the warnings from arts institutions, like the Druid Theatre, and the National Campaign for the Arts, about the difficulties they face. For our own sakes as much as for theirs.

Gathering people close together in confined spaces for several hours is what theatre in fact involves. But many other areas of the arts suffer also from social distancing, including local arts festivals, film production and to a lesser extent museums and galleries.

As Ruth Barton of TCD’s department of film argues, ‘just reopening the doors of cinemas and theatres, due on August 10th, is not going to restore any kind of normality. Rather, it is likely that people will ask themselves how much they really want to visit these spaces, even if due precautions are in place, and what the experience of watching a performance in a half-empty auditorium amounts to. To run a theatre group, or a live local cultural event, or keep a cinema open is going to need a government that is committed to sustaining arts and cultural workers in an engaged, creative manner’.

When the various financial aids which have been put in place, run out, the question arises, how will creative workers survive when the venues that show their work can only function at part-capacity; what will it feel like to perform to an audience sitting in isolated places in the auditorium, and how will companies, particularly those who deliver live work, survive in these circumstances?

Does this matter though for society at large? Yes, it does. One of the benefits to society of supporting the arts relates to the extent to which they can define those elements of national life which characterise Ireland as a country and distinguish its attitudes and way of life from those of other countries.

In this context, it could be argued that the benefit of group identity so generated is that it encourages social cohesion. If the arts help us in this process to understand who we are and to understand the ways of living and the problems of others, especially in the current crisis, then the benefits are for all Irish society. And their loss affects us all.

Moreover, works of arts sometimes manage to convey what whole communities wish to express but cannot do so nearly as well by any other means. The arts can also be a means by which new ‘voices’ are introduced to a community, voices that can redefine the fabric of the national or local culture. As such, they can play a pivotal role, if used properly, in integrating excluded minorities or communities. A potentially vital role in the current crisis. Thus, the concern about the future of the arts relates to much more than simply maintaining employment and incomes but goes to the core of who we are.

In a recent study for Creative Ireland, the importance of state patronage of the theatre and film-production sectors was again highlighted. Almost 80 per cent of the prominent writers/directors/actors involved with Irish theatre and film indicated that state funding was extremely or very important for their careers.

An equally important finding was how much early exposure to the arts mattered for later success and involvement. Even more important, networks formed at drama schools, College and early career matter greatly, in terms of job opportunities, moral support and creative synergies. The fact that nine of the cast of Normal People studied around the same time at Trinity provides perhaps further testament to this

Ireland has a particularly rich background in drama, local festivals and literature, and more recently in film. That this tradition is maintained during and well beyond the current crisis is important: state patronage and the facilitation of creative interaction being key ingredients for success in this regard. Not because of jobs or the economy. But because of how the arts hold a mirror to us all, and hence define and shape who we are.

1 Covid-19 outbreak recorded on ward at Naas General Hospital
2 Ireland among countries urged to consider reinstating Covid-19 restrictions
3 Russia approves Covid-19 vaccine after less than two months of human tests
4 Irish Michelin two-star restaurant to sell kebabs and fries from takeaway trailer
5 ‘I’ve been sleeping with my girlfriend’s sister. I need help. What do I do?’
Real news has value SUBSCRIBE