The Irish Times view on State borrowing: no signs of a squeeze

A large deficit is the correct prescription this year, and more borrowing will be needed to stimulate the economy moving into 2021 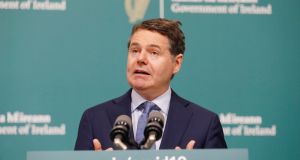 Minister for Finance and Public Expenditure and Reform Paschal Donohoe in Government Buildings, Dublin, during a media briefing on Covid-19 and plans for financial support. Photograph: Leon Farrell/Photocall Ireland/PA Wire

The raising of a further €6 billion in borrowings for the State by the National Treasury Management Agency (NTMA) leaves the exchequer with ample funds to pay for higher spending in the months ahead. The NTMA has raised €18.5 billion this year and the exchequer also has significant cash in hand from other sources. Unlike the last crisis, there are no signs of a squeeze on cash availability to the State.

Nobody knows how borrowing rates will evolve, but the European Central Bank’s presence in the market is a significant reassurance. It has said it will continue the emergency bond-buying programme introduced in response to the pandemic at least until next June, and possibly longer. This should hold down borrowing costs for Ireland, although the programme is a temporary one and will at some stage be wound down. More cash will need to be borrowed. The NTMA had said it would raise €20 billion-€24 billion this year and, depending on how the exchequer figures evolve, it could decide to raise a bit more. The Government has warned that the deficit could approach €30 billion this year.

The programme for government, if agreed, and the promised national recovery programme should give some context to all of this. A large deficit is the correct prescription this year, and more borrowing will be needed to stimulate the economy moving into 2021. Then, assuming the economy is recovering, higher growth should help to cut the deficit. The recent Irish Fiscal Advisory Council report said some spending cuts and tax increases might also be needed as economic recovery sets in. And additional revenues would certainly be needed to fund new government measures.

Much depends on the path of the virus. The OECD has warned that a second wave would darken economic prospects for 2021, and this is clearly a risk. And more funds will be needed to rescue businesses, continue to support people out of work and try to give the recovery some momentum. Shutting down the economy could be achieved quickly, but reopening is a huge and lengthy challenge.