Act now on victims' payment scheme for those maimed in Troubles 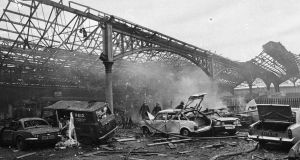 The aftermath of a bombing at Great Victoria Street railway station in Belfast in March 1972. Photograph: Ciaran Donnelly

Margaret was 38 years old and the mother of four young children in March 1982 when the bomb exploded.

She was in her office in the Banbridge estate agency where she worked and had just turned to the window when she took the full force of the blast.

She was stone blind in that instant.

Nearly 40 years on glass fragments still work their way to the surface and break the skin and her husband Richard has to gently tell her when she needs to change her blood-stained clothes.

When the sun catches her face her eye lashes sparkle.

There haven’t been many good days for Margaret since then but May 29th this year should have been one of them. That was the date when a scheme legislated for at Westminster and to be administered by the Northern Ireland Executive to provide modest payments to Margaret and others like her severely injured through no fault of their own during the Troubles should have been opened for applications.

Not only did the scheme not open but in a brazen disregard of the law none of the structures set out in regulations to administer the scheme has been set up.

The First and Deputy First Ministers were required by law to designate an executive department to administer the scheme by February 24th.

Despite minister of justice Naomi Long saying that her department would be willing to take it on Michelle O’Neill is still refusing to designate, claiming that thousands of republicans who served jail time will be barred.

Sinn Féin seems to be wilfully misrepresenting the criteria for those severely injured to be paid the pension.

The only people specifically excluded are those who were injured by their own hand and only someone living in a parallel universe would argue with that.

In 2006 when I was secretary of state for Northern Ireland I set out the statutory framework for the commission for victims and survivors.

The definition in the 2006 order was intentionally inclusive because I wanted to ensure that all victims and their families could get access to services like those provided today by the victims and survivors service and the new mental trauma service when it comes into operation.

But what has become known as the victims' pension is not a service.

It is the recognition and acknowledgement of the great harm done to people through no fault of their own.

Apart from the eligibility question there is also a dispute about who should pay for the scheme: the UK government says it should come out of the Executive budget and the Executive says the treasury should foot the bill.

Any previous secretary of state will tell you that there are always budget issues but they can be resolved if the political will is there.

It is the most damning indictment of political intransigence when a woman maimed for life in a bomb explosion nearly 40 years ago has to bring a judicial review to force the Executive to do what the law requires.

They are not looking for sympathy, let alone pity. They just want to be treated with dignity and respect

She is Jennifer McNern, who was only 21 when she and her sister Rosaleen, who was shopping for a wedding dress, went into the Abercorn restaurant, a Belfast city-centre cafe, for coffee.

A no-warning IRA bomb tore both Jennifer’s legs off.

Rosaleen lost both legs and an arm.

Jennifer is a member of Wave Injured Group whose campaigning over many years was the driving force behind the legislation.

I met Margaret and Jennifer along with other members of the Wave Injured Group two years ago when they brought their campaign for recognition to Westminster following years of frustration dragging themselves to Stormont for tea and sympathy but little else.

They are the most remarkable and inspirational group of people who suffered the most horrendous injuries.

They are not looking for sympathy, let alone pity.

They just want to be treated with dignity and respect.

I took up their case in the House of Lords and had the support of members from all sides of the house who found their cause as compelling as I did.

The legislation we pressed the government at Westminster to accept is designed to give some of the most vulnerable people in Northern Ireland and beyond the acknowledgement they deserve and have fought so hard for.

That they should be treated in this fashion by the very people who should be at their back is disgraceful.

I say to the British secretary of state Brandon Lewis and the Northern Ireland First and Deputy First Ministers: sort the problem out and implement the victims' payment scheme now. Or Jennifer McNern will ask a judge to force you to stop the excuses and obey the law with my full support - and that of all decent people.