Kathy Sheridan: Coronavirus is the most politicised piece of protein in history 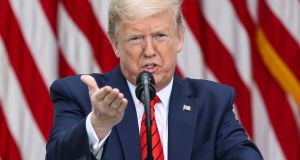 US president Donald Trump: Every malignant, divisive, racist word that has left his mouth, every lie, every declaration of support for a murderous autocrat, has led to this juncture in world affairs where a killer virus is just another electoral tool. Photograph: Oliver Contreras/EPA

The Nobel laureate, Sir Peter Medawar, once described a virus as “bad news wrapped in protein”. Or, possibly, “a piece of nucleic acid surrounded by bad news”.

Either way, such a welter of bad news surrounds this one that it might have left the great scientist slackjawed. And we’re not just talking about life and death or divisive lockdowns. Who would have anticipated the perfect storm that would make this the most politicised bit of protein in human history?

The only open political show in town at the moment is the special 19-member Dáil committee setting up to question the State’s response to Covid-19. The Taoiseach, Ministers and officials will be under scrutiny, as they should be at a time when life-and-death decisions continue to be taken on the hoof, under less than transparent circumstances.

We are entitled to insights into how and why decisions were taken. Without transparency, the public trust vital to the next delicate steps will leach away. Without trust, we are nowhere. If and when Covid-19 returns with renewed virulence, we need to be ready, to know what will be required of us and to be ready to trust our leaders.

We also need a parallel commitment from the Dáil committee. This is not the gotcha territory of the banking inquiry. We are mid-crisis.

People are dying, families are shattered, many people are silently traumatised. We can safely assume that all who present themselves for interrogation have been under unknowable stress; some have underlying conditions of their own and have been working savagely demanding hours; some have carried a burden that few of us will ever understand.

We have the right to undiluted truth but we also have the responsibility to listen for nuance and good faith. For all those reasons, we need these committee members regardless of party, to behave as honourable, objective, selfless, reflective representatives of every single inhabitant of this country. To that end, any member who abuses their position with political stunts, showboating or grandstanding should be cut off at the knees.

We know too well how the cynical politicisation of a public emergency ends. When this is all over, some moments will stick in the soul. One was in April, when the director-general of the World Health Organisation implored Donald Trump not to politicise this virus. “If you want to have many more body bags, then you do it. You have many other ways to prove yourselves. This is not the one to use for politics. It’s like playing with fire.”

While we were scanning the globe for leaders to pull the world together, there was infantile jabbering coming from the White House

Trump, you may remember, had tried to pin the blame on the WHO for thousands of American deaths and threatened to pull its funding. If, like me, what you recall of those weeks in March and April is an overwhelming sadness combined with bone-chilling fear for loved ones, remember that was the background noise coming from the leader of the free world. “Yeah, no, I don’t take responsibility at all”, he replied when asked about the desperate time lag in providing testing kits.

While we were scanning the globe for leaders to pull the world together, that was the infantile jabbering coming from the White House. The WHO was a handy bogeyman, as was China – damned for its own early cover-up of Covid-19 but acutely aware of the nauseating parallels with Trump himself who had dismissed the virus as a “hoax”designed to unseat him. And there were the US state governors; they needed to be “nice” to him if they wanted federal aid, he said.

What the New York governor described as “the music of the campaign season” can be heard in every calculation of every cent of that multi-trillion dollar federal relief effort controlled by Trump. An economy already teetering for a fall can now be spun as one shattered by Covid-19.

Every malignant, divisive, racist word that has left his mouth, every lie, every declaration of support for a murderous autocrat, has led to this juncture in world affairs where a killer virus is just another electoral tool.

To the east of us, the Brexit project hurtles towards another do-or-die-in-a-ditch day at the end of June when the UK must decide whether to request an extension from the EU. Boris Johnson’s close encounter with Covid-19 may have made him a little less casual about the “die” factor and a little more reconciled to economic reality. If so, the frantic redesignation of any extension as an act of statesmanship in the face of the pandemic will be a sight to behold.

Watch for the reaction of Daniel Hannan, the “brain of Brexit”, the man who knowingly helped to deceive, prod and poke a proud nation into two raging toxic tribes and now professes to be surprised that the nation is split. Writing in his Conservative Home blog in April, he was astounded at the “outrage and viciousness hurled overwhelmingly at those of us who back ending the lockdown ... Far from the nation being wrapped in a rare feeling of solidarity, it remains as tribal and splenetic as ever ... Left versus right, Remain versus Leave.” Imagine that.

Heading into our own inquiry, we should have a care.