Fiach Kelly: ‘Are we an irrelevance or a stable and reliable part of the Government?’ 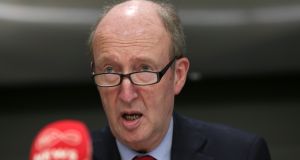 Minister for Transport, Tourism and Sport Shane Ross: the doors of the Independent Alliance and other non-aligned members of the Government have recently remained undisturbed. Photograph: Laura Hutton

A strange mix of emotions descended below decks in Government Buildings these past few weeks. The lower orders of the minority administration were thankful for the peace, yet somewhat rueful to no longer be central players.

As controversy about overspending on the national children’s hospital raged, Fianna Fáil TDs mused about ending the confidence-and-supply agreement once Brexit is settled and Sinn Féin, yet again, reached for a motion of no confidence.

Yet the doors of the Independent Alliance and other non-aligned members of the Government remained undisturbed. Nobody sought out their opinion; nobody feared they could be a fault line that could crack at a time of extreme political stress.

No microphones were shoved under the noses of Shane Ross, Finian McGrath, John Halligan, Kevin “Boxer” Moran or Katherine Zappone demanding they support Simon Harris against calls for his resignation and the Sinn Féin confidence motion.

“Are we an irrelevance, or have we matured to be a stable and reliable part of the Government?” asked one Alliance figure.

When TDs this week voted to keep Harris in office, by a margin of 58 to 53, the four deputies of the Alliance joked among themselves about how peripheral to the Dáil debate they had been.

Insults and animosity flew between Fine Gael, Sinn Féin and Fianna Fáil. Halligan’s brief, jack-in-the-box contribution was the reminder that the Independents are still part of this government, too.

Hardly any Opposition figures felt it necessary to attack the Alliance, a change from standard practice on such occasions when the junior partner in government is targeted as the soft underbelly.

The past decade saw Labour lacerate the Greens for supporting Fianna Fáil, before Sinn Féin repeated the trick on Labour when it took office with Fine Gael.

Sinn Féin tried to paint Fianna Fáil into that role this week, but Micheál Martin’s party is proving resilient. No wonder, then, that the Alliance skipped out of the chamber in relief as missiles flew above their heads.

They are more comfortable now in office than they have been at any time since entering Government in May 2016, thanks to both circumstance and tenure.

Where Enda Kenny seemingly revelled in repeatedly pushing the Alliance to the brink of meltdown on issues such as free votes – most likely with Ross’s description of him as a “political corpse” still in his mind – Leo Varadkar is said to be solicitous.

The Taoiseach is described as a quiet dealmaker whose natural reserve makes it easier to solve problems. He and his senior Ministers are content to administer small doses of political dopamine, such as sending Fidel Castro admirer McGrath to Cuba as part of the St Patrick’s Day programme of ministerial travel, or letting Independent Ministers stage mock fights for public consumption when deals have already been quietly struck behind the scenes.

Genuine issues which cause discontent hum along in the background and are no longer seen as existential threats to the Government.

Even if Brexit wasn’t the glue holding everything together, it would be hard to envisage an administration falling almost three years in on issue such as the judicial appointments Bill, health services in Waterford or a Garda station in south Dublin.

Surprisingly, support for Independents has not cratered, as it often can with junior coalition partners. Successive opinion polls have registered support for non-aligned candidates in the mid to high teens.

As of now, it seems that the practice of Independents being significant players in government – holding senior and junior ministerial office – is here to stay.

Fianna Fáil and Fine Gael’s opposition to sharing power with Sinn Féin has only hardened, and Martin says it would not be “preferable” for both he and Varadkar to share power.

Barring a seismic realignment in Irish politics – a grand coalition or Sinn Féin taking office – Independents will be needed to make up the numbers for minority or majority governments.

Butter comprised of Labour, the Greens and the Social Democrats – both Fine Gael and Fianna Fáil’s first option – will only spread so far.

Some Independents, such as Mattie McGrath, will always be opposition politicians, but others are likely to be looking across the Dáil chamber at Ross and his colleagues and promising themselves they will take the chance to become ministers if it comes around again.

For parties and voters, the trade-off is accepting that the eternally transactional nature of politics is splashed in technicolour when Independents are in office. Each will demand pet projects and constituency funding in exchange for making Varadkar or Martin Taoiseach.

Ministers of wildly different talent and application would have to be tolerated, and questionable policies – such as Ross’s plan to exempt pensioners from property tax, a proposal shamelessly aimed at his Dublin Rathdown electorate – paid lip service before being shelved. Risible policies and dud ministers, however, are not the exclusive preserve of Independents.

Above all, the Alliance has demonstrated that the once-exotic can remain bought. Their quiescence may, in time, be seen as a welcome indication that governments with a handful of Independents in senior positions can last the distance.