The problem with banishing Shamima Begum

World View: The UK's decision to revoke the 19-year-old's citizenship is morally flawed and legally dubious 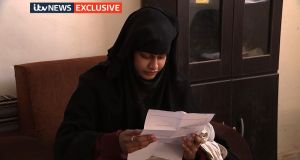 It was, former US chief justice Earl Warren remarked, “a form of punishment more primitive than torture”. For Voltaire, it was not only irrational but the height of bad neighbourliness; after all, what was banishment of a criminal but “throwing into a neighbour’s field the stones that incommode us in our own”. Lately, however, banishment – or its modern equivalent, citizenship revocation – has come back into fashion. Gulf states such as Bahrain, Kuwait and Qatar have become enthusiastic passport-strippers, using the threat of statelessness to suppress dissidents and human rights activists.

But it’s not only despots who have acquired a taste for throwing their citizens into involuntarily exile. In December, Minister for Justice Charlie Flanagan decided to strip Ali Charaf Damache, a Algerian-born man convicted of providing support to Islamist terrorists, of his citizenship on the grounds that he broke his oath of “fidelity to the Irish nation and loyalty to the State”. This week, the British government moved to revoke the citizenship of Shamima Begum, the 19 year old from Bethnal Green in London who travelled to Syria to join Islamic State in 2015.

The idea has long pedigree. In ancient Greece, banishment was a moderate form of punishment (it was better than death, after all) for those deemed to have threatened civic virtue or broken the social contract, whether through failing to pay back public loans or some other transgression. Immanuel Kant saw it as a legitimate tool against criminals. The rise of nationalism and the nation state, which defined the national territory as a members’ club and hardened the distinction between insiders and outsiders, meant states were less willing to accept undesirables from elsewhere. At the same time, the claim that the nation state was made up of a particular, unique people seemed to imply a duty to take responsibility for all compatriots, however troublesome they might be.

As a result, banishment went largely into abeyance by the late 19th century, and states instead focused their expulsion powers on non-citizen aliens. But a series of events since then – from the first World War through the cold war and, most recently, 9/11 and Islamist terrorism – have been used by governments to reintroduce the idea that citizenship is conditional. Fear of the “enemy within”, a common propaganda trope in the combatant countries during the Great War, found an echo in the paranoia about communist infiltration in the US in the middle of the century. Both were used to extend the state’s power to annul nationality. Similarly, concerns about terrorism more recently have prompted many western governments to ease their rules on excluding citizens.

The UK’s attempt to wash its hands of Shamima Begum is a good example of why, legally and morally, citizenship revocation is often a bad idea. In making the decision, home secretary Sajid Javid relied on his power to deprive a dual national of British citizenship if he believes this is conducive to the public good and if it does not make the individual stateless. But legally the Begum case is far from straightforward. If she also has Bangladeshi citizenship, as London claims, it appears that could be true only because the children of Bangladeshi parents are automatically citizens at birth (Begum’s family say she never sought or received a Bangladeshi passport, and, to complicate matters, Dhaka says she is not a citizen). If she is not now legally stateless, then she is de facto stateless, living in a war zone with no travel documents and both the UK and Bangladesh disowning her.

The deeper political problem with cancelling passports in this way is that it introduces tiers of citizenship, and it just so happens that those occupying the lower tier tend not to be white. Singling out naturalised or dual citizens, as the UK law does, frames the discussion squarely around the supposed disloyalty of those born outside the state. If a white London-born girl with no family ties to Bangladesh did what Begum did, the government would not have the option of withdrawing her passport.

Javid’s decision may be legally shaky, then, but it is even more of a cop-out on moral grounds. There may not be much sympathy for Begum in the UK, but in this case a power normally used against adults who commit serious crimes is being deployed against a woman who was radicalised as a child in London and is now living in a squalid camp in northern Syria with her vulnerable newborn baby (himself presumably entitled to British citizenship). It’s not even clear what crime, if any, she may have committed.

If Shamima Begum is a problem, she is the UK’s problem. That’s where she was born and grew up. That’s where she was radicalised. And it’s there – not in a Kurdish-run camp in Syria or in Bangladesh, a place she has never even been – that she has the best chance of being either punished or rehabilitated.

Revoking her citizenship was quick, cheap, popular and painless for the British government. Bringing her home would be expensive, controversial and potentially fraught with difficulty. But it would also be the right thing to do.

1 More than 30 people queue overnight to secure property in Carlow
2 Coronavirus: Further 430 cases reported in State is most in a day since April
3 ‘To die of love’: The 1968 sex scandal that still fascinates France
4 My friends keep mocking my new boyfriend’s small penis
5 Susie Dent: ‘Jimmy Carr is incredibly rude to me. I took it as a compliment’
Real news has value SUBSCRIBE