Independence narrative must be freed of sweeping statements 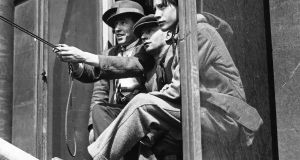 IRA men pulling down the union jack from the Masonic Hall on Molesworth Street in Dublin in 1922.

We won the war. We brought the forces of the British Empire to a standstill. We had no resources, but we had courage and a dream. And the dream came true. Or so seemed to be the message of the three-part television series The Irish Revolution which concluded during the week on RTÉ. Based on the bestselling book, The Atlas of the Irish Revolution, this television history did not actually do justice to that book and its layers; instead, it opted for a voice-of-God narrative that was too reverential. Were it not for the wonderful maps unfolding on the screen, it could have been broadcast in the 1950s such was its lack of nuance.

In the final programme, much was made of the departure of British troops from Southern Ireland in January 1922. This, according to one contributor, “meant the dream had become the reality. They had won”; another contributor declared that this moment was about “the people controlling their own destinies”. What had been “won”, of course, was highly debatable and what level of control achieved equally contentious.

Dreams of freedom are potent and galvanising and we were entitled to them, especially when they were backed at the ballot box, and when that mandate was ignored by Britain, conflict was inevitable and justified. But dreams, even at their best, will rarely result in anything more than semi-deliverance and even getting to that point can involve compromises and harrowing experiences. Some of these compromises were acknowledged, but emphatic declarations were still too apparent in The Irish Revolution series.

‘An Ireland that never existed’

When he looked back as an old man on his participation in that revolution, Denis McCullough observed: “We lived in dreams always; we never enjoyed them. I dreamed of an Ireland that never existed and never could exist. I dreamed of the people of Ireland as a heroic people, a Gaelic people. I dreamed of Ireland as different from what I see now – not that I think I was wrong in this.”

We don’t have to depict those rebels as wrong either, or bring a suffocating judgmentalism to their quest, but we do need to challenge uncomplicated narratives and a deceptive depiction of one, overarching, collective cause and mentality.

David Fitzpatrick, who died in Belfast on Wednesday, was one of the most brilliant historians of his generation; he had exceptional depth and range and a fierce independence of mind as he tackled themes of modern Irish history, including emigration, religion, politics, violence and literature in his many books. He was also passionate about the methods and craft of the historian and had much to say on commemoration. He warned those commemorating the revolutionary period to “avoid the use of simplistic and exclusive dichotomies or facile attributions of motive”.

Instead, he saw the tasks of the historian as being to “raise awkward issues and above all, seek to broaden the terms of debate”. He suggested one of the most useful things professional historians can do during periods of commemoration is to challenge “distortions and fatuities” circulating in official and media discourse. This is not, as he saw it, about the historian “avoiding all forms of judgement” but about adding “moral intensity to the ways in which we commemorate and comprehend the past”.

They are wise words and we should heed them in excavating the War of Independence and Civil War periods. We have many tools at our disposal to assist us. Today sees the launch of more files from the military service pensions collection, a voluminous archive generated by veterans of the revolution and their dependants who applied for pensions. The latest releases deal with the Brigade activity reports of the IRA, the information amassed in order to assist in the administration of the pensions, providing details of War of Independence activities across the whole island.

The files lay many aspects of the revolution bare; there is no shortage of evidence of bravery and devotion, but there is nothing dreamy about this archive as it illuminates the battles for status, recognition and material survival during and after the revolution as well as the quest to get recognition for those who had been involved in non-combative but still vital roles. The files underline that there is no “pure truth” of what happened and they will not prompt a Mise Éire-type soundtrack.

The archive also highlights that emigration was a key part of the post-revolution dispensation for many veterans. Of 35 Cork IRA men who had been involved in an attack in Skibbereen in July 1922, for example, eight ended up in the USA, including Philadelphia, Massachusetts and New York, while a file in 1935 referred to the whereabouts of former IRA men involved in an attack in Cobh in August 1922: “Peter O’Shea, now in USA . . . Andy Butterley, now in England, Thomas Hayes, inmate of Cork Asylum, Maurice Twomey now deceased.”

1 Covid-19 restrictions: Government prepares move to Level 5 for six weeks
2 Life under Level 5: What it would look like for the country
3 Life under Level 4: What will be closed under tighter restrictions?
4 Doctors’ letter calls for new strategy to ‘co-exist’ with Covid-19
5 Dr Muiris Houston: ‘For me, the most shocking Covid-19 statistic of all is this…’
Real news has value SUBSCRIBE