Will the Tories betray the DUP to avoid a no-deal Brexit?

Fiach Kelly: Only other route to an exit deal might be for Brussels to do the dirty on Dublin 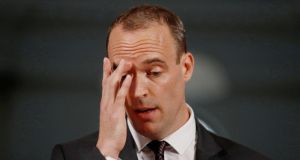 Trust us, the British government says, as Dublin and Brussels wearily ask why they should. The Irish Government and European Union negotiators, accustomed to London failing to live up to its Brexit promises, have come to expect little but disappointment.

This week, when the British government published the first of its public guides to how to cope with a no-deal Brexit, proved no different. On Northern Ireland and the Border, on which the threat of a no-deal Brexit hangs, there was only the glib guidance that any business with concerns about cross-Border trade should contact the authorities in Dublin if the UK crashes out of the bloc next March.

This reflected hard Brexiteers’ long-standing claim that the UK has no intention of erecting infrastructure at the Border and it is therefore up to the EU and Ireland to do so, if they wish. It appears this is now official British government advice. Sure enough, John Redwood, the arch Eurosceptic Tory MP, said he was “very reassured” by the release of the papers by Dominic Raab, the new Brexit secretary.

May should have moved much further by now to compromise and secure a deal on the withdrawal agreement, including the backstop, by October

“Their view is they are not going to put a border up,” one senior Irish Government figure said of London’s position. Meetings in Brussels last week on Irish issues are understood to have been fruitless, with little progress made.

It is not just in Dublin that Theresa May’s willingness to play chicken over the Border is causing concern. Robin Swann, the Ulster Unionist leader, spoke of the “economic importance of access to the UK’s internal market” while recognising “the extent of cross-Border trade with the Republic of Ireland”. The Alliance Party said it was farcical for the British government to suggest cross-Border businesses should contact Dublin for advice.

But the frustration is more acute in Dublin and Brussels; as they understood it, May should have moved much further by now to compromise and secure a deal on the withdrawal agreement – including the backstop – in time for the European Council meeting in October.

May’s Chequers plan, which envisaged the UK sharing a customs area with the EU and remaining aligned to the single market for goods, was expected to be the first phase of a shift towards a softer Brexit.

The European Union would not countenance Britain picking which parts of the single market it liked and discarding those it didn’t, but it gave May the time, space and encouraging noises she needed to see her through her own political difficulties.

Yet after losing Boris Johnson, her first foreign secretary, David Davis, her first Brexit secretary, and a string of lower-ranking ministers in protest at the move towards a softer Brexit, May is probably wary of provoking further unrest in the Conservative Party. So the anticipated step forward from the UK after the Chequers White Paper was published, in July, has not materialised. “Chequers was to be phase one, to get to phase two,” a source said. Nor has the UK tabled any backstop proposals that the EU regards as a basis for negotiation.

The backstop commits both the European Union and United Kingdom to ensuring there is no hard border in Ireland even in the event of a no-deal Brexit, which the EU has interpreted as keeping Northern Ireland in the single market and customs union.

May and her confidence-and-supply partners in the Democratic Unionist Party reject this because it splits Northern Ireland from the rest the UK. A British proposal to apply the backstop across the UK, which would stay in the customs union and parts of the single market, was rejected by the EU.

Dublin insists Brussels supports its demand for a backstop. London insists the backstop, as interpreted by the EU, is a nonstarter

Ideas to make the backstop more politically palatable to the UK and DUP, such as low-profile customs and regulatory checks on the British mainland, rather than at Larne or Belfast, are now being tossed around, albeit with the realisation that this would still be extremely difficult for London to accept.

Yet there is a view in Dublin that such a deal is doable if there is political will in London. But also an acknowledgment of just how big that “if” really is.

There is also an expectation that the mood music around the Brexit talks will get significantly worse before it gets better. May faces the Tory party conference in late September and early October, and little by way of meaningful negotiation is expected before then.

The initial October deadline for a deal on the withdrawal agreement has slipped into November, and may slip yet further.

Dublin insists that the remaining members of the EU support its position that without a backstop there will be no withdrawal agreement, which would cause a chaotic no-deal Brexit next March. London insists the backstop, as interpreted by the EU, is a nonstarter.

Earlier this year, as those who negotiated the Belfast Agreement gathered at Queen’s University Belfast to celebrate its 20th anniversary, Seamus Mallon, the former Northern Ireland deputy first minister, had a warning for the DUP.

He cautioned those luxuriating in their current status as kingmakers at Westminster, with an effective veto over May’s Brexit policy, that their new friends would eventually do the dirty on them.

For a no-deal scenario to be avoided Mallon will have to be proven right. Or the EU will have to do the dirty on Dublin.