Fianna Fáil appears in lockstep with Government on budget and Brexit 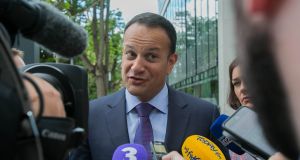 Taoiseach Leo Varadkar has spoken of entering talks on a successor to the confidence-and-supply deal before the budget, but Fianna Fáil leader Micheál Martin says no negotiations will take place until later this year. Photograph: Gareth Chaney/Collins

The political class, so accustomed to being on edge over the prospect of a general election, appears to have have missed some signs this week that should relieve its perpetual anxiety.

The odds on an extension to the confidence-and-supply deal which underpins the Fine Gael-led minority government have now significantly shortened, although little attention has been paid to this development.

Perhaps we shouldn’t be surprised, since one of the clues pointing towards a longer period of stability was wrapped up in the debate on the Summer Economic Statement, seen as one of the driest documents to emerge from the Department of Finance every year.

In the statement itself, Minister for Finance Paschal Donohoe outlined that his next budget would amount to €3.4 billion but, with €2.6 billion already spent, only €800 million is available for new measures such as tax cuts and welfare increases.

In addition, Donohoe and Michael McGrath, the Fianna Fáil finance spokesman, will agree some tax increases to pay for a package of new measures worth more than €1 billion, in line with the last two budgets. They are already at one on the merits of €500 million being allocated to a rainy-day fund, too.

It is a far cry from the working assumption many TDs have held since this Government took office: that the last budget of the confidence-and-supply deal would be a €3 billion pre-election payoff.

The past few months – in which Donohoe sought to change this perception by tightening the budgetary parameters – caused some alarm in Fianna Fáil.

Accusations from Fine Gael that Micheál Martin’s party would ruin the economy by spending all the money that was available raised suspicions among Fianna Fáilers that they were being lured into a political trap which would see them blamed for a failure to pass a budget, and a consequent election.

Donohoe had flagged that he did not want to spend all the money that would be at his disposal and outlined in the summer statement that €900 million would be held back. While one European Union spending rule would allow him to spend it, the Minister argued that doing so would breach another, related to total borrowings, and would increase the deficit.

Sinn Féin, Labour and others rejected Donohoe’s arguments. McGrath and Fianna Fáil, however, were in lockstep with the Minister.

Anything else, McGrath said, would not be “right course” when “the economy is growing so strongly after seven or eight consecutive years of growth”.

Fianna Fáil’s response to the summer statement indicates the party leadership has decided to deny, as they see it, Taoiseach Leo Varadkar an excuse for an election. Martin has always insisted he wanted to honour his confidence-and-supply commitment to pass three budgets, and the past week makes it almost certain that promise will be kept.

Fianna Fáil has also indicated it will not cause any instability as the Brexit negotiations reach a conclusion later this year. Martin has said the October summit of the European Council, which is expected to sign off an EU-UK withdrawal agreement, is crucial. But there are fears the process could drag on longer. And if October is an important date, then surely so too is next March, when Brexit actually takes effect – even if the safety net of a transition deal is in place.

Martin told European Commission president Jean-Claude Juncker to ignore reports “that there is any question about the stability of the core Irish political consensus and mandate on Brexit”.

While it still accuses the Government of overhyping last December’s agreement on the backstop, Martin’s comments over the past week may yet guarantee the Government’s survival until the shape of Brexit, and its effect on Ireland, become clearer.

Varadkar has spoken of entering talks on a successor to confidence and supply before the budget, but Martin says no negotiations will take place until later this year.

The Taoiseach may argue that it is good practice to open talks before any deal concludes, but he was a negotiator of confidence and supply and, as such, should be bound by its text, which allows for a review “at the end of 2018”. When the talks begin, an extension of the current arrangement – or something less formal – is no longer a remote possibility.

While the opinions of the Fianna Fáil parliamentary party will play a part, the signals from the leadership suggest it has decided to stay the course.

Varadkar’s strong opinion poll ratings, the passage of the referendum on the Eighth Amendment and the progress of the associated abortion legislation through the Oireachtas – including potential objections from Fianna Fáil TDs – are all undoubtedly factors behind such thinking.

Badly-needed general election candidates could also be blooded in local elections next spring and campaigns around crime, for example, could also dent Varadkar’s popularity.

In recent days, one seasoned Fine Gael political operator confidently predicted the general election would not be until October 2019 at the earliest.

Until recently, such a suggestion would have been met with extreme sarcasm by most in Leinster House. After the past week, it does not seem far-fetched at all.