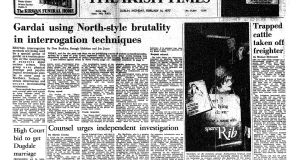 Almost 40 years ago, this newspaper caused a huge stir and was denounced after its exposé of Garda brutality.

There was much talk during the week of “saturation policing”, stronger surveillance powers and a new Garda “taskforce” to fight organised crime in response to the spate of gangland killings.

To what extent adequate resources will transpire to finance such initiatives and produce the desired results is open to question, but there are also the issues of increased powers for the force at a time when it is mired in controversy over alleged malpractice and whether more powers will be matched with proper accountability and safeguards.

Historians frequently cite the creation of An Garda Síochána as one of the success stories of this state, and with much justification. In the Spring of 1922 the new commissioner of police Michael Staines began laying the foundation stones for the new force but his appointment of several former Royal Irish Constabulary (RIC) officers to senior positions created resentment and dissent from IRA elements who had joined, which became a mutiny in May 1922.

Staines’s experience and the environment that existed then is a reminder of the exceptionally difficult circumstances in which the new police force was born. But before he left his post, Staines made a very important prediction: “the Civic Guard will succeed not by force of arms, or numbers, but on their moral authority as servants of the people”. The new force would be mostly unarmed at a time when Irish society was still heavily militarised, unsettled and violent.

As Vicky Conway underlines in her 2014 book Policing Twentieth Century Ireland, however, there is also a misguided tendency to idealise the history of the force by suggesting it marked a radical departure from the discredited RIC. In truth, argues Conway convincingly, the structure of policing remained highly centralised and political and historically, responding to difficult policing environments has not been matched with sufficient reform and the force has had a propensity to use force unnecessarily.

These are not popular things to point out at the present time given the revulsion that exists about the callous crimes of criminal gangs; in the same way it was not easy to point to the problems within the Gardaí in the 1970s. Almost 40 years ago, this newspaper caused a huge stir and was denounced after its expose of Garda brutality under the headline “Gardaí using North-style Brutality in Interrogation Techniques”. This was a reaction to the “heavy gang” that was then operating in the force. An Amnesty International Mission to Ireland at that time confirmed the brutality.

The government was accused of not doing enough to respond to these issues and ironically, it was the same government that the previous year in 1976 had helped to secure the adoption by the UN of a resolution condemning such torture and demanding impartial investigation of allegations of mistreatment. A measure of the Irish double thinking on this was summed up by a civil servant, who suggested the Irish approach was to “support proposals on humanitarian grounds where they do not create serious problems or are not impracticable”; another view expressed was that a report by a “foreign body” should not be allowed to influence the government to take any action “which would have the effect of undermining the effectiveness of the Gardaí dealing with crime”.

The contemporary versions of this mindset are central to the Garda scandals that have been exposed recently; what we have witnessed in relation to the politics of policing and the dirty underbelly of the force is not new; nor is the “blue wall of silence” identified by the Morris Tribunal report on Garda corruption and misconduct in 2008

Forty years ago, the atmosphere in relation to Irish policing became poisoned and internal critics of the force silenced at a time when security against paramilitaries was one of the state’s main priorities and Gardaí had been killed doing their jobs. Quite rightly, an attack on the Gardaí, or the murder of one of its ranks, was seen as a crime against all; the force was seen, as it still largely is, as a trusted institution and a mirror image of the values of the society it serves.

Murderous intent against its members is seen as an attack on a force that, against considerable odds, has commanded the allegiance of virtually all sections of society and it is important to acknowledge that and the decency and honesty of the vast majority of the force at this time of the 20th anniversary of the killing of Detective Garda Jerry McCabe.

* This article was amended on January 30th, 2019 for legal reasons.

3 Coronavirus: Variant discovered in UK and Nigeria found in State for first time