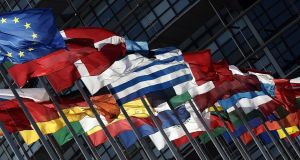 The series of mantras adopted by the Irish Government since the Brexit referendum have been reasonable and understandable, but they may have a shelf life that will ultimately require a change of course. Taoiseach Leo Varadkar has oft stated that the Government was not going to “design a border for the Brexiteers” while Minister for Foreign Affairs Simon Coveney has repeatedly insisted “solutions need to come from where the problem is, which is London”.

It is hardly surprising they would seek to keep the focus on the architects of this crisis, but as the clock ticks, that focus does not look like it will provide solutions to what will become distinctly Irish problems, notwithstanding the current EU 27 solidarity with Ireland. We all know some form of a hard border will be necessary in the event of a no-deal Brexit and nobody here wants it except those intent on fomenting destabilising violence. But it is also apparent from our history that insisting Britain alone has to solve this problem is not the answer because Britain will not frame a solution with the interests of Ireland in mind, for the same reason the Irish Border question did not feature in the Brexit referendum campaign.

When he was writing about the tentative peace process in 1996, historian Tom Bartlett, a native of Belfast, asked in relation to Ulster unionism, that if a shared Britishness between them and the rest of Britain was coming under increasing strain and if the Union itself was obviously faltering, “Where do we go from here? Where we do not go is to London for solutions to the Ulster question” because “solutions devised in London are devised with English objectives in view”.

That does not necessarily mean that solutions devised in Dublin are the answer either. And all the more pity that there is no coherence from NI arising out of its power vacuum at present but rather increasing polarisation, which is an inevitability given that vacuum. Where the solution will lie is in collaboration, once again, between London, Belfast and Dublin, with the support of the EU; an alternative version of the peace process, during which the EU was content to remain largely on the sidelines until a solution had been devised which it could then support politically and economically.

Would an alternative Labour government make the Irish dilemma any more manageable?

Dublin’s continued focus on the crucible of Westminster as the only Brexit show in town is also problematic because it elides some aspects of the peace process, especially the thorny issue of citizenship for those living in NI. Just what happens to those in NI who identify as Irish citizens and are entitled to rights on that basis? Where do they fit, not just in post-Brexit Ireland but also in post-Brexit Europe? Are there answers for them from Dublin, London or Brussels?

And what if the British government finally falls on its sword? Would an alternative Labour government make the Irish dilemma any more manageable? It is doubtful, because there is no coherence within that party in relation to the Border problem. While it might be the case that historically the British Labour party made more sympathetic noises about a United Ireland, this meant little in practice. A century ago it advocated “self-determination in all exclusively Irish affairs” but that policy oscillated; while JR Clynes, who briefly led the party from 1921-2, insisted there should be “one parliament speaking for one united Ireland”, its opposition to partition only lasted until partition became a reality and, in practice, not withstanding occasional rhetoric about Irish unity, it shared the broad indifference to Ireland.

When Tom Bartlett was writing in 1996 he suggested that, given the increasing disintegration of Britain, a NI separate from England and the Republic, “but with sentimental and economic links to both, might yet qualify for membership of the European Union and find her future within a European federal structure. Twenty years ago such a solution would have looked bizarre; can I conclude by forecasting that twenty years from now it will be accepted as the only way forward?”

More than those 20 years have passed and this reads like a sensible long-term answer to the contemporary crisis and something which – based on the Brexit vote in NI, the increasing fragility of “Britishness”, the degree to which the DUP clearly does not speak for most in NI, the insistence by both communities in NI that they do not want a hard border, and the need for something new rather than falling back in to the trenches of old – would be a fair solution to the ongoing Irish problem. Such a solution, however, is not something to be devised in London but in collaboration with all relevant and affected parties through dialogue, not least because “temporary” solutions based on hard borders have not worked in the past and will surely not work in the future.

1 Ireland could lose out as France lays claim to most of €5bn Brexit compensation fund
2 Miriam Lord: The Dáil's answer to John Wayne overcooks the ham slice, by slice, by slice
3 Ranelagh’s brand new street with three-beds from €1.325m
4 The Crown’s Josh O’Connor: ‘I’m a republican. I’m not interested in the royal family’
5 Q&A: What restrictions are going to be lifted next week?
Real news has value SUBSCRIBE