World View: Brexit is about disintegration of UK not Irish unity

Republic must be more aware of potential constitutional implications of Brexit 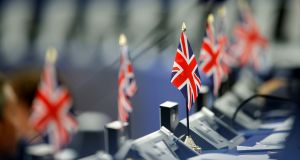 “Most multinational unions collapse at the centre, not the periphery”.

This astute observation by Michael Keating of Aberdeen and Edinburgh universities sprang to mind listening to Theresa May’s warning that a no-deal Brexit would fuel Scottish demands for independence and calls for Irish reunification.

Keating added, in comments to the Financial Times drawing on his academic research: “When it comes to the point that people in England don’t care any more . . . then that’s the union finished.” May’s increasing awareness of this destructive logic driving her Conservative party’s leadership campaign in England shows up in her decision to order a report for her successor on how the union can be strengthened.

That case will be all the more difficult given the expected differential impact of a no-deal Brexit this autumn on Northern Ireland, Scotland, Wales and left-behind parts of England. Such a sudden squeezing of fiscal capacity would create a corrosive politics on how to distribute pain between the four UK jurisdictions, with great potential for stoking peripheral anger alongside English and central Westminster resentment.

Polls show repeatedly how strongly Conservative members and voters prefer achieving Brexit over supporting Scotland and Northern Ireland. That upends the renewed support for the union expressed by Boris Johnson and Jeremy Hunt who compete to lead the party. Johnson especially alienates Scottish political activists of all hues based on his previous disregard for their interests and his evident English home counties appeal. Despite his pledges to union-proof policy for fair treatment, the deeper strain of English nationalism coming through the campaign and from future Conservative competition with Nigel Farage’s Brexit party is likely to win out.

Labour members and voters are more unionist in their solidarities. But the growing fragmentation of English politics between the Conservatives, Labour, Liberal Democrats and the Brexit party will dampen that effect. So would any Labour search for Scottish National Party support after a general election, since the SNP would demand a second independence referendum and/or a differentiated deal allowing Scotland to remain closer to the EU.

By the same token, it would be difficult for Labour to resist supporting a second EU referendum. Were it to be held and reverse Brexit, how much would it resolve these deepening fissures in the UK’s constitutional order?

There is little sign of a will or capacity to conduct the root-and-branch reform many legal and political analysts say is needed to avoid break-up – by reforming, differentiating or federalising the UK in a more codified way. Calls for a UK-wide constitutional convention, citizens’ assembly or new foundational Act of union lack cross-party support and citizen interest, and are rejected by the dominant SNP in Scotland. The ignorance and indifference about Brexit’s consequences for the UK’s peripheries among politicians and officials in London reinforces pessimism among these analysts as to whether such reform is possible.

That leaves Ireland – North and South – just as exposed to this crisis in the UK’s constitutional order as Scotland is. Unionists should have more cause for alarm about it than nationalists and republicans have cause to believe Brexit will reinforce demographic shifts to hasten a Border poll on Irish reunification. Voters and political parties in the Republic of Ireland are more fully aware of the economic and political downsides of a hard or no-deal Brexit than they are of its potential constitutional implications. But more say this period requires preparation, anticipation and prudential deliberation of any such change. A Border poll without that would repeat the Brexit mistake of not defining leave by failing to clarify Irish constitutional futures.

People in Northern Ireland are now more open to change than its politics allows. More say they are neither nationalist nor unionist than identify with either of these ostensibly immutable groups, recent research by Katy Hayward of Queens university shows. The “neithers” are more female, better-educated, travelled and younger than the rest of the population and more likely to say they are British and Irish. There was a 15 per cent shift to this position among younger unionists in recent polling.

The Belfast Agreement provides for civic forums and participation alongside political power-sharing and North-South official co-operation. It is surely time for the much stronger civil society groups in Northern Ireland and those involved in cross-Border work to demand that these be put in place as Brexit unfolds. Ireland needs to react intelligently to the crisis at the centre of the UK so as to ensure Irish interests are protected from its fallout.