Frank McDonald: Dublin is set to grow – and its problems with it 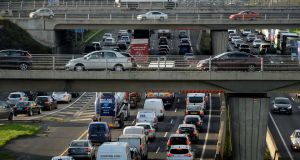 Traffic flows on the M50 are rising every year and now exceed 120,000 vehicles per day. Photograph: Alan Betson

Given the abject failure of previous efforts to sketch a credible spatial strategy for Ireland, it is perhaps not surprising that there has been scant commentary, let alone real public debate, about the latest National Planning Framework, Ireland 2040 – Our Plan.

The main points have been reported – that the State’s population is anticipated to rise by 1 million over the next 20 years or so, and it’s proposed to accommodate 25 per cent of this growth in Dublin, 25 per cent in the four smaller cities and the remaining 50 per cent in “key regional centres, towns, villages and rural areas”.

Declared aims of the plan include transforming settlements of all sizes through imaginative regeneration, thereby enabling people to live closer to where they work, as well as planning for a better distribution of regional growth, jobs and prosperity, and regenerating rural Ireland by promoting “environmentally sustainable growth patterns”.

One of the key elements of any national plan must be to curb the overwhelming dominance of Dublin. It now accounts for 40 per cent of the State’s population – even without taking any account of its obese commuter belt that extends to 100km or more, as a direct result of the failure of boom-era governments to implement previous plans.

This can be done only by developing the second-tier cities, particularly Cork and Limerick, as alternative growth centres. Otherwise, as Ireland 2040 says, there would be “an ongoing shift in population and jobs towards the east and to the counties around Dublin in particular” – thereby exacerbating already serious congestion in the capital.

Traffic flows on the M50 are rising year by year and now exceed 120,000 vehicles per day, while many commuters endure unsustainably long journey times. On the housing front, property prices in Dublin generally increase at a higher rate than in the rest of Ireland, and values (as well as rents) are also much higher for average homes than elsewhere.

Ireland 2040 – Our Plan says that, while Dublin has “generally performed well in recent years, key challenges relate to housing affordability, transport, urban amenities and livability”. The city will need to fit a greater proportion of its growth within the metropolitan area and to “offer improved housing choice, transport mobility and quality of life”.

The plan goes into much greater detail about what infrastructure Dublin needs than it does with the other four (much smaller) cities, mentioning such expensive projects as Metro North, Dart Underground, improved bus services, plus delivery of a cycleway network, a second main runway at Dublin Airport and further expansion of Dublin Port, Ireland’s gateway.

With increasing congestion on the M50, despite a €1 billion spend on upgrading it to six lanes and reconfiguring its interchanges in 2010, we can anticipate a growing clamour from the motoring lobby for a previously mooted outer ring road – an M50 bypass, in effect – running from Drogheda to Navan, then southwards to Naas and beyond.

It is clear that the Government has no will to redistribute growth to the regions, due to a visceral fear that it might derail Dublin as the State’s economic engine. Even Niall Cussen, principal planning adviser in the Department of Housing, Planning and Local Government, candidly stated recently that “major regional shifts are not really realistic.”

This is reflected in the relative vagueness of projects to boost the attractiveness of Cork. Although the plan mentions (as a “growth enabler”) the development of a “much enhanced public transport system”, including new east-west and north-south corridors, it doesn’t say what this should be; it’s all to be “subject to further analysis”.

The plan also emphasises the need to improve “connectivity” between the second-tier cities and between them and Dublin, noting that “average journey times per km from Cork are up to 30-40 per cent slower per km travelled than from Dublin to the other cities”. Naturally, this being Ireland, it’s referring only to journey times on the motorways.

The rail network barely gets a look-in; a mere passing glance. As the Green Party has complained, “our railways are left to wither on the vine, starved of investment” while the Government plans to throw more roads at the traffic problem, thereby reinforcing car dependency. There are no proposals in the plan to speed up inter-city journey times by rail.

As for the difference between Ireland 2040 and the 2002 National Spatial Strategy, with its multiple “gateways” and “hubs” that never materialised, ministers insist that the latest plan will not only be statutory but backed up by statutory “regional spatial and economic strategies”, all overseen by a quasi-independent planning regulator.

Furthermore, it will set the context for a new 10-year capital investment programme, due to be unveiled shortly; this means that the plan will be linked with funding, unlike its 2002 predecessor, and would have a much better chance of being implemented. But the choices it makes are flawed, if we are to achieve the elusive goal of “balanced regional development”.

Public consultation on ‘Ireland 2040 – Our Plan’ is open until noon on Friday, November 3rd. See ireland2040.ie

1 Donald Trump directs team to co-operate on Biden transition
2 Alison Curtis: My guilt at not going for a second pregnancy
3 Exiting Level 5: Ministers to push for reopening of shops, restaurants and churches next week
4 How to gift your child a house deposit . . . tax free
5 Covid-19: Hairdressers, gyms and religious services could return next week
Real news has value SUBSCRIBE