Vote: Almost half of Dubliners want skyscrapers by 2050, what do you think? 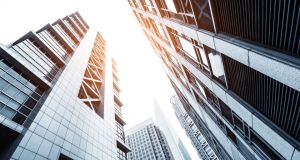 What will Dublin be like in the year 2050? The answer will depend on the decisions that we make from today onwards.

Almost half of Dubliners are in favour of skyscrapers in the city by 2050, according to a new survey.

The findings were released on Thursday as part of a Dublin Chamber report entitled A Vision for Dublin 2050, which looks at how people want Dublin to evolve over the coming decades.

It noted that 58 per cent of Dubliners said taller buildings would be a good thing for the city in order to facilitate greater population density. However, just 42 per cent were in favour of the building of skyscrapers in Dublin.

The report is based on responses to Dublin Chamber’s Great Dublin Survey, an online poll carried out between April and August and answered by more than 20,000 people, as well as a representative survey of 500 Dubliners by Amarach Research.

The survey included questions about the technologies and advances that they think will change daily life in the coming years. Six out of 10 respondents predict cash will be a thing of the past.

Opinions were split regarding the likely influence of robots, with just less than half of people surveyed seeing them as a feature of daily life in 2050, as opposed to 53 per cent who said artificial intelligence will impact on daily life.

The results show the preference of home ownership is unlikely to dissipate, with four out of five people expressing a wish to own their home. In comparison, three out of 10 people said they’d be content to rent their home.

In relation to cleanliness, more people said they think Dublin is “dirty” versus “clean”.

“As the capital of Ireland, and the powerhouse of the national economy, it is vital for everyone that Dublin works,” she said. “Our aim in establishing this initiative was to explore the need for better long-term planning in the Dublin region.

“When it comes to quality of life, Dublin currently sits outside the top 30 cities in the world. That’s not good enough. Dublin Chamber wants to see Dublin rise up those rankings and challenge the world’s best cities for the standard of living that they offer.”

“What will Dublin be like in the year 2050? The answer will depend on the decisions that we make from today onwards. The underlying sentiment that comes through in the answers to our survey is that people want, above all, the simple things in life.

“They want somewhere welcoming to live, at a reasonable location from where they work. They want good public transport and clean urban spaces. They want to spend more time with their family and at leisure, and spend less time in traffic.

“We have a long way to go. But it’s clear who the people are that can make this vision a reality. It is the business community. It is the national and local politicians. It is the civic and public servants. It is the citizens of Dublin and Ireland,” she said.