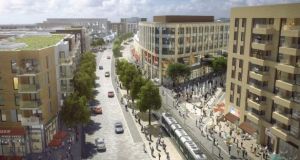 Cherrywood in south Dublin: The land bank could become a new town centre

The largest developer in the new town of Cherrywood in south Dublin, is seeking more than €41 million from Dún Laoghaire Rathdown Council for 126 social housing apartments, costing up to €442,000 each.

Hines last week lodged a planning application with the council for its Cherrywood Town Centre development of shops, restaurants, cafes, bars, leisure facilities, a hotel and 1,269 apartments. The scheme is the largest sought to date in the Cherrywood Strategic Development Zone (SDZ) where a fast-track planning process allows developers to get planning consent within two months of application.

Under the planning laws, Hines is required to provide 10 per cent of the apartments for sale to the council for social housing at a discounted price, if it secures planning permission. Changes made in 2015 mean councils can no longer take cash from the developer instead of social housing.

The main discount afforded to local authorities relates to the site value. The developer can only charge the “existing use value” and not its value when developed. Another discount should be provided on the builder’s profit, but this is less clearly defined. The Department of Housing said a “reasonable profit” should be agreed, based on the costs that would have been incurred by the council had it retained an independent builder to undertake the work.

“I don’t think these prices are credible, they don’t tally with how much it costs to build in the area. In addition, the scale of what Hines is developing means they can achieve great economies of scale. They are making an absolute fortune out of this site.”

The council could agree to buy land from the developer, instead of apartments, he said.

“Hines has 280 acres in Cherrywood, so they could give us 28 acres to build on, at agricultural prices.” However, he said his preference would be for social housing to be interspersed within the Hines development.

A spokesman for Hines said the location had “unique costs” including “a raised podium to create a walkable environment at Luas track level, public plazas, landscaped walkways, double basements and a high level of external finishes in public areas”. Notwithstanding this he said, the costs “compare relatively favourably” to the development costs for apartments in Ireland.

A spokeswoman for the council said €41 million was the developer’s estimate of the costs.“If planning permission is granted, all relevant costs associated with the development are then evaluated by Dún Laoghaire Rathdown to verify the actual cost.”

Hines estimates it will take about three years to develop the town centre, with the work likely to commence in the second quarter of 2018. In total almost 9,000 homes are expected to be built in Cherrywood.