Will Hutton: Europe’s obsession with historical grievances is tearing it apart

Brexit and the push for Catalan independence have roots in a over-remembered, over-deified past 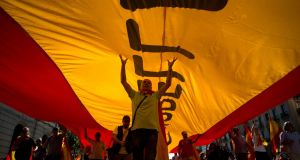 Protesters hold a giant Spanish flag during a demonstration called by “Societat Civil Catalana” (Catalan Civil Society) to support the unity of Spain on October 8, 2017 in Barcelona. JORGE GUERRERO/AFP/Getty Images

A collective curse has settled over our continent, in which past triumphs are contrasted with present grievances. Only independence, taking back control and avenging a continuum of injustice can restore justice, prosperity and lost glory, even if, in Catalonia, there could be a slide to civil war, as EU commissioner Günther Oettinger warns. It is not that the rest of the world is immune from this contagion: witness the passions over the Confederate flag in Charlottesville, Japanese politicians genuflecting at their war shrine or jihadists avenging the Crusades. But Europe, with so many tribes boasting so much history in so many countries, is the memory capital of the globe, where too many states are so vulnerable to the agonies of secession and fragmentation.

The latest manifestation is in Catalonia. Here is one of the most prosperous regions in Europe boasting one of the most dynamic cities, Barcelona, invoking tribal memories of a glorious past to insist on independence from the Castilian yoke. For Catalan nationalists, Spain has not changed its spots: it remains the autocratic, oppressive state it always was, with Franco’s falangism only just beneath the surface. Catalonia must restore ancient glories and regain control of its destiny, not least over its taxes. This week, the Catalan president, Carles Puigdemont, is to address Catalonia’s parliament, following the controversial independence referendum with a 90% yes vote. But it was won from less than half the electorate, following the legitimate if crude attempt by the Spanish government to suppress it on the day.

Rubber bullets are never a good idea. Yet Spain’s constitutional court ruled the referendum unconstitutional and has now ruled that the proposed session of the Catalan parliament to act on the result should be suspended as illegal, being outside Spain’s 1978 settlement setting out the terms on which its regions’ parliaments can meet. It is right. Hence this week’s parliamentary meeting will be a rebellious gathering if Puigdemont goes ahead. Insiders believe he will call for independence. There will be no recognition by any member of the EU; no legal recognition in Spain or Europe’s courts; no membership of any international intergovernmental grouping. There won’t even be agreement on what currency it can use.

The Catalan government knows all this, even courting the arrests that will follow and the imposition of direct rule by Madrid. But there is a powerful faction that wants to set in train a dynamic that will lead to real independence, at whatever economic and social cost. Already, half-a-dozen companies have left Catalonia, with the Spanish government offering assistance. That movement will turn into a rush. This is a gathering calamity.

The best justification for what is happening is that these inflated memories are but froth on a deeper and natural yearning of every subnational, culturally united minority to enjoy civic self-determination. The worst interpretation is to see Catalonia as an expression of a destructive populist appeal to its citizens’ worst instincts – puffed-up hatred of the other, driven by false grievances and impossible hopes – while cloaking those unappetising instincts in the language of self-government and democracy.

The complicated truth is that, while there is a proper appetite for more self-government, we should be more clear eyed about all this remembering of old injustices as the source of the passion. It leads nowhere but to enmity and an inflaming of nonexistent differences – Catalans and Castilians are both inheritors of Europe’s Enlightenment traditions and, above all, respecters of the rule of law. Now there are tensions bordering on conflict.

As American writer David Rieff argues in his subtle and important book In Praise of Forgetting, we are living in an era of the cult of the memory, which is phenomenally destructive. Yes, it is proper to remember, but just as it becomes psychotic for individuals to live in the past, wanting to avenge injustices from childhood, so obsession with memory is psychotic for communities. Be aware of what is going on, writes Rieff, when the French Front National celebrates Joan of Arc, the SNP William Wallace or, as happened yesterday, when tens of thousands of Polish Catholics prayed for Europe on the anniversary of the battle of Lepanto, a Christian routing of Muslims.

History is being manipulated to serve an agenda of closure and a justification for ethnically based superiority, the worst example of which was the atrocities committed in Bosnia. Respect the past, argues Rieff, but distrust its deification for partisan ends. We should do more forgiving and forgetting and, in an era of globalisation, try to create governance structures better able to sustain fair societies.

Spain is tottering on the brink. A Catalan declaration of independence followed by direct rule from Madrid would be a trigger for civic mayhem and colossal economic dislocation. There are some optimistic signs. Over the weekend, there have been apologies from both sides for the violence: Madrid suggests elections – and maybe Puigdemont will draw back. Yet the atmosphere is suffocatingly cloaked with too much remembering.

The right response, as Catalonia’s Socialist party argues, is for Spain to recreate itself as a republican, federal state rather than attempt to sustain itself as a monarchially legitimised unitary state. The only way to avoid disaster and give the mainstream parties in Catalonia the political ammunition to argue against secession, which neither they nor the majority of Catalans want, is to offer the prospect of an autonomous Catalonia within a federal Spain. It is through political creativity that historical myth can be relegated to where it belongs, along with much more determined and imaginative activism to address inequalities and neglect.

Similarly in Britain. If the unfolding disaster of Brexit is to be stopped in its tracks, and the over-remembered, over-deified past restored to its proper place, we need parallel creativity – a constitutional settlement with Europe and, at home, a real assault on the injustices that fed what was at bottom a protest vote against a status quo too many found intolerable. Too much remembering has become toxic. It is time to forget and move on.

Will Hutton is a Guardian columnist, principal of Hertford College, Oxford, and chair of the Big Innovation Centre.