Ballymun scheme to be model for affordable housing, says Murphy 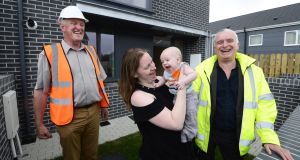 Helen Cheevers with her baby Erik outside their home in Ballymun, with Hugh Brennan of Ó Cualann cohousing alliance and architect Joe Kennedy. Photograph: Cyril Byrne

A small housing co-operative that has sold 49 homes in Ballymun, Dublin, with prices starting at €140,000, has been used as a model for a new national affordable housing scheme to be announced shortly, Minister for Housing Eoghan Murphy has said.

He attended a Dublin City Council meeting on Monday night to answer questions on housing and homelessness in the city. It was his first meeting with the country’s largest local authority since he was appointed Minister last June.

The details of a new national affordable housing scheme will be announced later this week, Mr Murphy told councillors.

The introduction of a new scheme was announced almost two years ago as part of Budget 2016, but has yet to be established. The scheme will be the first to give set discounts to qualifying owner-occupiers since the previous national affordable housing scheme, which saw Dublin buyers get new homes at 30-35 per cent below market rates, was scrapped in 2011.

Under the last scheme a local authority would buy houses, at a discount, from developers, and sell them to first-time buyers whose incomes were below a certain threshold. Under the 2000 Planning Act developers had to provide 20 per cent of any new housing estate for social or affordable housing.

The discount deals were agreed with the developers when the estates received planning permission and then passed on to the purchasers when the homes were completed. Homeowners who sold them within 20 years had to pay a percentage of the proceeds of the sale to the local authority, known as a “clawback”, to repay the discount.

Ó Cualann Cohousing Alliance this year developed an estate of 49 houses in Ballymun, with prices starting at €140,000 for a two-bedroom houses, €160,000 for three-beds and €199,000 for four-beds. Buyers had to satisfy income limits and other criteria and were also subject to a clawback if they sold. The co-op plans to build another estate of 66 homes next year.

“We had them into the department to see how we can take their learning and bring it to every other housing body and every other local authority. We are doing that work at the moment in the context of the affordable scheme.”

Several councillors raised concerns with Mr Murphy in relation to the significant delays in building social housing, and asked him to remove the “red tape” for local authority construction.

Mr Murphy said that although he was working to reduce red tape, there were dangers in trying to cut procurement timelines.

“I think we have to be careful as we move to address the crisis that we don’t inadvertently do things that might have unintended consequences into the future. I absolutely agree that we can remove red tape. I think there are changes we can make in relation to regulations that can be helpful, and we will do that.

“But we are not going to ever be able to get it to a situation where the four-stage approval process is a six-month timeline. We just can’t because there are necessary checks and balances that have to be in place, but we can reduce the current period.”