Dubliners could get their big bronze ‘time ball’ back 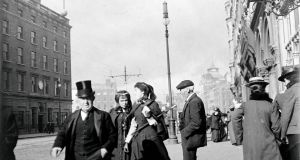 Ballast House time ball was taken down in 1920. It came from a time when the city were on Dublin time rather than GMT. Photograph: National Library of Ireland

The Dublin “time ball”, a giant bronze timepiece visible across the city until the time of the 1916 Rising, could be reinstated as part of the refurbishment of Ballast House at O’Connell Bridge.

The time ball, which was erected at the tip of a mast on top of the old Ballast Office in the mid-1860s, then headquarters of Dublin Port, was dropped 6ft at 1pm every day to allow ships in the docks to set their chronometers to Greenwich Mean Time.

However, when the ball dropped at 1pm GMT, for the rest of the city, it was just 12.35 DMT – Dublin Mean Time. The capital, and much of the country kept to its own time through most of the Victorian era, recognising the fact that the sun rose and set 25 minutes later in Dublin than London.

This small act of independence ironically came to an end in 1916, a few months after the Rising, when The Time (Ireland) Bill was passed in Westminster, standardising time across Ireland to GMT.

The time ball gets a mention in James Joyce’s Ulysses, when Leopold Bloom, walking near O’Connell Bridge, notices that the “Timeball” on Ballast House has fallen.

The existing Ballast House, a 1980s pastiche of the 19th-century original demolished in 1979, is undergoing refurbishment as an office complex. Neil Burke-Kennedy of NBK Architects, will in the coming days seek planning permission from Dublin City Council to reinstate a replica time ball on top of the building.

“The 4ft bronze ball will be the exact height and size of the original ball – we will replicate it exactly to reinstate this lost gem and significant part of our city’s heritage.”

The original time ball was removed some time between 1916 and 1920 and its fate is unknown. The replica, if it secures planning permission, will be dropped at 1pm daily – GMT.