The €13bn tax will now be paid to the US and not to Ireland. This is the correct outcome 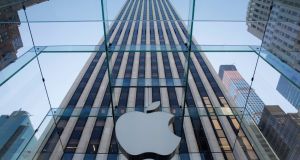 The Apple logo at its 5th Avenue location in New York. Apple had Irish companies at the heart of its international tax structure but the objective was to defer the payment of US tax rather than avoid Irish or other EU taxes. Photograph: John Taggart/EPA

The General Court of the European Union rejected all lines of reasoning put forward by the Competition Commissioner, Margrethe Vestager, in her original finding that Ireland had granted selective state aid to Apple.

The comprehensive nature of the court’s ruling should be presented as a loss for the commission rather than a win for either Ireland or Apple. If you are looking to declare a winner then it should be the coffers of the US Treasury.

Although Apple will undoubtedly welcome the decision, it has no significant financial implications for the company. Apple will not be €14 billion better off as a result of this ruling. Instead, €13 billion of tax that might have been paid to Ireland will now be paid to the US. This is the correct outcome.

The current system for taxing corporate profits is that profits are taxed in the country where the risks, functions and assets that generate those profits are located.

One of the primary reasons why the commission lost this case is that it did not show that the activities which generated the €100 billion of Apple profit it argued should be taxed in Ireland were located in Ireland. In fact, the commission made no attempt to show this and this was primarily because they could not show it.

The key line of yesterday’s court ruling was that the commission’s state aid finding was done “without attempting to show that that income was representative of the value of the activities actually carried out by the [IRISH]branches themselves.”

From the outset, one of Ireland’s responses was that the only Apple profit that should be subject to tax in Ireland is profit that was actually generated in Ireland. The court has upheld that view.

Vestager grabbed headlines with references to minuscule tax rates of 0.005 per cent and tax bills of €13 billion

But the court did not completely exonerate Ireland. The court concluded that the contested tax rulings were “incomplete and occasionally inconsistent”. This would suggest that the commission overreached by going for a full attribution of Apple’s profits on sales outside the Americas to its Irish branch.

A narrower case based on inconsistent transfer pricing may have had a better chance of standing up to legal scrutiny, but even then the court said this might not have been “sufficient to prove the existence of an advantage”.

However, such an approach would not have been as headline-friendly. From the outset there has been political hue to what are typically terse and technical analyses.

Vestager grabbed the headlines with press-conference references to minuscule tax rates of 0.005 per cent and tax bills of €13 billion. But when the commission’s 130-page decision was published a few months later, it contained neither. They were provided for public consumption but were not part of the technical detail.

Apple is one of the most profitable companies in the world. In the 10 years from 2010 to 2019 it made an incredible $570 billion in profit before tax. Over that same period it made $100 billion of cash payments in corporate income taxes to governments around the world, albeit mainly to the US.

Over the coming years it will pay even more tax to the US government on those profits. Apple had Irish companies at the heart of its international tax structure but the objective was to defer the payment of US tax rather than avoid Irish or other EU taxes.

Up to 2017, the US taxed the worldwide profits of US companies at 35 per cent. However, companies could defer the payment on profit they made abroad until they repatriated those profits back to the US.

The US tax code has provisions that allow US companies to shift a significant amount of their profits offshore. The IRS has challenged several of these arrangements in the US tax courts, including cases against Amazon and Facebook, but has yet to win. So the US had to wait until the profits were repatriated to collect the tax, if ever.

This changed with the Tax Cuts and Jobs Act signed into law by president Donald Trump in December 2017. This included a “deemed repatriation tax” which had to be paid even if the companies didn’t bring the profits back. But it came with a big sweetener.

Instead of paying tax at 35 per cent, which was the prevailing rate when the profits were earned, the companies would be charged 15 per cent. This was a huge gain for companies such as Apple from their profit-shifting.

In total, Apple is expected to pay about $35 billion in US tax on these “offshore” profits. The profits that were subject to the European Commission’s state-aid case are linked to about $18 billion of that tax.

If the state aid case was upheld and Apple had paid €13 billion ($15 billion) to Ireland, then a credit for this tax would have meant its tax payment to the US under the Tax Cuts and Jobs Act could have fallen from $35 billion to $20 billion.

As was pointed out by a number of high-level US officials, including former assistant treasury secretary Robert Stack, it would have been the US taxpayer that would have ended up footing the bill if the state-aid finding had been upheld.

However, the US got the result it wanted, and such was the overwhelming rejection of the commission’s case by the court that a successful appeal seems unlikely. The court left very few threads for the commission to cling on to.

Vestager issued a combative statement after the ruling was published, but it was hollow and noisy rather than making any substantive points.

The ruling may actually increase the chance of bringing the US back to the table for the OECD’s base erosion and profit shifting (BEPS) project, with the OECD also holding the view that the profits should be taxed in the US. Global changes are needed to mend the broken tax system for taxing companies. It’s time for the state aid stick to be put away.

1 Covid-19: Cabinet looks to tighten travel restrictions and decide on pubs reopening
2 Social worker overcomes poverty to graduate with master’s degree
3 Vicky Phelan: ‘I hated being a mother – I would have gladly walked away from it’
4 Five Covid-19 clusters found among Irish fruit and vegetable growers
5 Dún Laoghaire home of renowned acting mentor Betty Ann Norton for €1.5m
Real news has value SUBSCRIBE