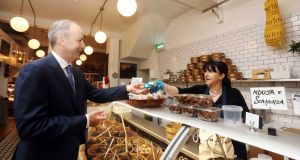 Micheál Martin: will have a difficult enough job contending with the political fallout from the daily grind of events. Photograph: Leah Farrell/Rollingnews.ie

In his first week as Taoiseach Micheál Martin had to contend with the capacity of Irish politics to be dominated by relatively trivial distractions, like the old traffic violations of a newly appointed Minister, while his Government seeks to contend with profoundly important decisions arising from the Covid-19 pandemic.

It was probably no harm that Martin received such an early reminder of the absurd side of Irish politics. It is something with which he will have to find a way of dealing during his stewardship of the Taoiseach’s office over the next 2½ years .

One of the reasons the last government did so badly in February’s general election was its inability to convince the public that it deserved some credit for substantial achievements on hugely important issues such as the economy and Brexit. Instead it took an unmitigated battering for its failures to deal with intractable problems in health and housing.

It took the Covid emergency to wake the public up to the fundamental importance of solid leadership in a time of crisis.

The most remarkable feature of last month’s Irish Times opinion poll was the astounding jump in the satisfaction rating for the former taoiseach and his government and the fact that the public had revised its views since the election on what issues are important.

During the election campaign polls showed health and housing were by far the most important issues in determining how people voted while the economy, Brexit and climate change barely rated a mention. By last month the new reality had asserted itself and rebuilding the economy had become paramount, followed by measures to tackle Covid.

The challenge facing Martin will not simply be to ensure that his Government takes the right decisions on the big issues facing the country but to communicate them to the public in a clear and comprehensible manner so that it is not distracted by the inevitable Opposition and media hysteria over one alleged scandal after another.

The assured handling of the Covid pandemic by Varadkar and his team has given the new Government a good starting point as it has sobered up public opinion to focus on the issues that truly matter rather than the often meaningless political shenanigans in Leinster House.

The internationally-renowned political scientist Francis Fukuyama has attempted to identify why some countries have performed far better than others in response to Covid.

“The factors responsible for successful pandemic responses have been state capacity, social trust, and leadership. Countries with all three – a competent state apparatus, a government that citizens trust and listen to, and effective leaders – have performed impressively, limiting the damage they have suffered. Countries with dysfunctional states, polarised societies, or poor leadership have done badly,”? he wrote in a recent issue of the magazine Foreign Affairs.

By any reasonable assessment this country has performed relatively well. Those in leadership positions have acted decisively and wisely and citizens have generally responded in a spirit of social solidarity. It is not difficult to spot the democratic countries which have done worst, Brazil, the United States and the United Kingdom.

It is no coincidence that all three have appalling leaders who thrive on promoting aggressive nationalism, loudly proclaim their distrust of experts and so -called elites and personally refuse to follow the medical advice on how to limit the spread of the virus.

Our home-grown version of these populist leaders can be found in Sinn Féin who demonstrated such contempt for social distancing measures at the Bobby Storey funeral last week. It is no accident that over the years prominent figures in the party have promoted an anti-expert narrative on major issues and have been to the fore in promoting distrust of vaccination and fluoridation.

The new Government now has an opportunity to build on the trust the public has shown in the State and its institutions over recent months. The first step will be to demonstrate competence in tackling the major issues facing society but it will also need to be far more robust than its predecessor in calling out the dangers of the populist narrative being peddled by its opponents.

On a more practical level, Martin will have to show the same steel he displayed in his Cabinet choice when it comes to dealing with disciplinary issues in his own ranks. He simply cannot afford to allow a narrative to develop that Fianna Fáil is reverting to its old ways now that it is back in office.

Barry Cowen’s bizarre driving history is something that happened in the past and he did not deserve to lose his ministerial position over it. However, the episode may have given the impression that the Taoiseach is prepared to tolerate low standards out of a sense of misplaced loyalty.

From now on, Martin will have to show zero tolerance for ministerial behaviour that threatens to undermine public belief in the integrity of the Government. He will have a difficult enough job contending with the political fall-out from the daily grind of events without having to expend political capital defending dubious behaviour from any of his ministerial team.