Noel Costello: ‘He gave me his Roman emperor glance and let the page run through all editions’ 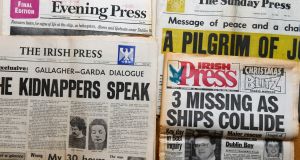 A 25th anniversary is usually a cause for celebration for any newspaper person but not this one. The Irish Press Group, comprising the Sunday Press, Evening Press and Irish Press, closed its doors in 1995.

I was lucky to spend my twenties working for the group. Walking in the door in January 1977 when I was 21 and in my last year in Trinity, I got a job as a copy boy on the news subeditors’ desk. It was all night work but well paid with good conditions due to the Irish Transport and General Workers’ Union (ITGWU). A year later I managed to get a job as a news sub.

The Press group had two offices in Dublin, the newspapers on Burgh Quay and a lot of the administrative staff on the corner of O’Connell Street and Abbey Street, a site now occupied by Supermacs.

The Burgh Quay office had once been a theatre and many a night the theatrics were better than any paid-for stage performance. The staff on the subs’ desk was a motley crew of writers, poets, and other colourful characters, including an ex-priest. It had an Irish American, Australian, New Zealander, a couple from the neighbouring isle, Northerners but not many Dubliners and only one woman, Helen McGarry.

The Irish Press though the flagship was the least popular in terms of sales, while the Evening and Sunday Press outsold their rivals. At one time the Sunday had sold close to 500,000 copies.

Every six weeks I had to do a Saturday night shift on the Sunday Press. On my first shift I remember taking my break, which was of course in the pub, with an Evening Press sub who was also doing a shift on the Sunday. He went on to tell me that he was a playwright, that he broke his ankle trying to climb into Grangegorman, had been arrested for driving up Grafton Street after a few too many, and his pièce de résistance, that he sprinkled lighting fluid on himself and tried to set himself alight in the men’s toilets in the Press. I sat there wondering what the hell he was going to do that night.

The Sunday Press staff had a certain attitude to the daily grinders from the other papers. However they all shared one weakness, a dread of the caseroom where the printers put the pages together. They ruled the roost on that floor and woe betide any journalist who stepped out of line.

Early on in my career on a Sunday Press shift having the temerity to point out to the then Sunday Press editor Vincent Jennings that Charlie Haughey’s picture was appearing twice on page one, once in the blurb at the top and then the main photograph. However, with me being from the Irish Press, he gave me his Roman emperor glance and let the page run through all editions.

Back in the day drink played a major role in newspaper operations and many a good journalist suffered the consequences. The Press office was strategically placed next to one of Dublin’s best-known pubs, Mulligan’s and it was where we decanted on our cutline (break) between 10 and 10.30 every night. The chief sub of the time, John Banville, a decent man, was usually the only exception, who remained in the newsroom, quietly reading a book. I’m sure he was glad of the break as running the show was a formidable challenge even on a good night.

The country edition went at one in the morning and the city at four and then it was off to the Irish Times Club. It was located opposite the Fleet Street entrance of the paper on the top floor and stayed open until about five in the morning. It was men only and among its clientele would be Vinny Doyle and his acolytes from the Indo, some Times people and a decent contingent from the Press. It was a real test to get up and down the narrow stairs and the barman Bernard was not to be messed with. The club was the watering hole of last resort and nobody but nobody wanted to get barred. If Bernard gave you a second glance you behaved. Then it was back to the paper for 5.30 the next evening and off again.

My roaring twenties were abruptly truncated mid act with the arrival of a baby boy at 26 who I was often handed coming in the door in the early hours. He had a very sobering effect.

The news subs were a strange bunch and I remember poor old Banville being foolish enough to invite us to a party in his house in Clontarf. My girlfriend lived on the same road where he was already something of a celebrity. We met in the Yacht pub before the party and when we finally got to the house things went reasonably well at first. But there were two types of people enjoying the evening, John’s friends of an artistic disposition and us. And as oil and water don’t mix, and some of us were too well oiled, he eventually had to show us the door with a “Right, you lot out.’’

There was one writer and sub who cleaned up his act just before his departure. Seamus de Faoite, a Kerryman, had been a contributor to the Bell. In his later years with the paper he was reduced to subbing shorts and the weather. His work was aided by a whiskey bottle hidden in his drawer. However, just before he retired, he cleaned up his act and put together a book of his short stories.

I remember meeting him on Eden Quay and he looked a new man delighted with himself. Unfortunately, he didn’t live too long afterwards.

My own years in the Press came to an end in 1985, after we were locked out for three months over a printers’ dispute on new technology. We came back gradually with the Evening Press ahead of the daily. I still remember being given the splash lead to sub for the evening by Alan Wilkes the paper’s chief sub. Now this was an honour and a challenge as the headline to sell the paper was of just two decks and had a count of 13 characters each line. It concerned a senior Army officer who had received a liver transplant, a major news item in 1985. I came up with “New liver for top Army man” and he let it run.

But I had to go as I had by then a mortgage, two kids and other bills to pay.

I left with a heavy heart but could see the writing was on the wall. I went back to where I had started, The Irish Times, and hopefully dear reader you will still be reading it in another 25 years.