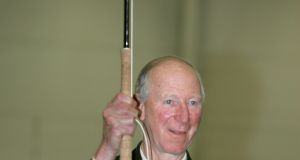 “For a few heady days that June, the field beside our house became a national stage. Ground capacity, stretched even by the 300 who might attend a Stedfast Cup match against one of the local glamour teams (Tunney Meat Packers from Clones were the Barcelona of my childhood) was overwhelmed.” Photograph: Cyril Byrne

The word “surreal” is overused these days, for circumstances often only mildly unusual. But I feel justified in applying it to my memories of June 1993, when Jack Charlton’s Republic of Ireland squad spent several days training in what was practically the back garden of the house where I grew up.

Not that we had a back garden. What we had was a farm, on the outskirts of Carrickmacross, Co Monaghan, where our next-door neighbours included the Carrick Rovers soccer pitch. The arrangement was so intimate, their groundsmen used to keep his equipment in one of our sheds. And because of the frequency with which balls were kicked into the field behind us, the club also erected a wooden stile in the hedge to facilitate retrieval.

The pitch would later be described by an unkind Dublin journalist as a “meadow with more folds than an unmade bed”. But that may have been part of what recommended it to Big Jack & Co.

Before World Cup qualifiers away Latvia and Lithuania, it was decided the team would encamp at Carrick’s Nuremore Hotel which, football aside, ticked several important boxes. It was an hour from Dublin Airport, had a golf course, and was surrounded by lakes. Jack loved to fish. So did some of his players, including John Aldridge, who landed a monster pike – 25lb – on one of his local outings.

More from a sense of duty than expectation, Rovers offered their facilities too. They were astonished when the FAI accepted. The pitch was indeed distressed at the time, but as was pointed out, the players were preparing for games in the Baltic, where bumpy surfaces were likely. I’m told that Rovers then offered to make conditions even worse, if required. It wasn’t deemed necessary.

We did not get many tourists in Carrickmacross then, it must be said. Historically, the town has enjoyed an uneasy fame for being twinned (in song at least) with Crossmaglen, a few miles north, via a winding road said to be populated with “more rogues than honest men”.

But for a few heady days that June, the field beside our house became a national stage. Ground capacity, stretched even by the 300 who might attend a Stedfast Cup match against one of the local glamour teams (Tunney Meat Packers from Clones were the Barcelona of my childhood) was overwhelmed.

Space became even more limited when the FAI decreed that no spectators were allowed behind either goal. Apparently, during a training session elsewhere, a rocket-like shot from Paul McGrath had almost assassinated a bystander. So the crowds of autograph-hunters spilled out onto the approaches of Ballybay Road, which was transformed into Wembley Way for several days.

Exiled in Dublin, I caught a bus home to experience the madness. The most dream-like moment was when, evading pitch security, I stepped from the roof of one of our aforementioned sheds onto the roof of the dressing-room, where a photographer from The Irish Times (a newspaper whose door I had yet to darken) was training a zoom lens on Roy Keane, then about to leave Nottingham Forest for Manchester United in a British record deal.

As recorded in Rovers’ official history, the Dublin media did not do the extraordinary events full justice. The Irish Press reported them to have taken place in the grounds of Carrick Emmets (the GAA club up the road). The Independent was sniffy – literally: complaining of the “rural smells” to which refined urban noses were exposed. That may have been McNallys’ farm.

But Big Jack, at least, seemed to enjoy his visit to the area. More than most people, he should have felt at home along the border. His native Northumberland was for centuries a semi-independent buffer zone between England and Scotland. A northern English version of South Armagh, it was home to the “Border Reivers”, outlaw clans who raided on both sides. Circa the 17th century, the most notorious Reiver families included the “Milburns” and “Charltons”, later more famous for their depredations against opposition soccer teams.

There was a suspected reiving incident in Carrick too that June. When Ireland kitman Charlie O’Leary counted his footballs afterwards, one of the 18 was missing. This would have been a minor loss in an area whose detractors might advise you to count your fingers after every handshake. But Charlie was not impressed.One short-lived theory suggested that a woman (probably from Crossmaglen) had smuggled it out under her top while pretending to be pregnant.

The truth was more innocent. It emerged that Niall Quinn had brought a ball with him onto the bus.

1 Mike Murphy: ‘I won’t do another over-70s lockdown’
2 The far right rises: Its growth as a political force in Ireland
3 Blanchardstown, Tallaght top table for highest Covid-19 rates
4 Prof Sam McConkey: This is the beginning of the second Covid-19 wave in Ireland
5 Coronavirus: Public health experts considered moving Dublin to Level 4
Real news has value SUBSCRIBE