The Irish Times view on English in the EU institutions: lost in translation 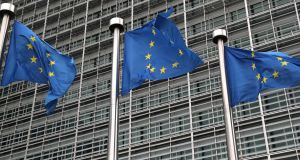 How Brexit will affect the use of English in the European institutions is a live question in Brussels. Photograph: Yves Herman/Reuters

It seems somehow fitting, after a 47-year relationship defined by mutual incomprehension, that the EU’s final words to the UK as it departed the union were lost in translation. “Thank you, goodbye, and good riddance,” Croatia’s EU ambassador Irena Andrassy told her British counterpart Tim Barrow at the end of his final meeting of EU envoys in Brussels last week. She assumed “good riddance” was akin to “good luck”, according to diplomats in the room.

How Brexit will affect the use of English in the European institutions is a live question. Until the mid-1990s, most of the EU’s business was conducted through French, but English asserted itself in particular after the arrival of the anglophile Swedes and the Finns in 1995 – a trend that accelerated after further enlargement rounds. Over the years, the EU has developed its own English dialect, famous for such ugly creations as planification, comitology, decommit and actorness – none of which is found in the natural word.

In institutions filled with non-native speakers and relying so heavily on a vast translation apparatus, nuance can often be the victim. A German MEP was puzzled when a British counterpart seemed to call him a “waterproof coat” (the original was “anorak”). A missing hyphen meant an eminent “vice-president” was once described in Spanish as the “president of vice”. In English a spade is a spade, but the British former MEP Richard Corbett recalls the word being rendered in an EU document as a “single-bladed mono-handled digging instrument”.

The supremacy of English in Brussels is often assumed to put Ireland in an advantageous position. But the decline in linguistic diversity comes at a big cost, putting more distance between the union and its people and smothering some of the vast cultural wealth on which the project is built. The post-Brexit reorganisation is an opportunity to reverse that. The French elite has often argued that to speak English is to think American. Certainly, language is a way of thinking, a cultural sensibility, a lens on the world. To shrink our vocabulary is to shut our eyes.