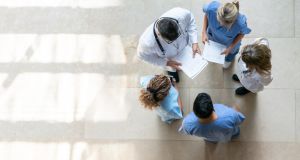 A year ago the then government announced that in future it would only appoint consultants on a new Sláintecare contract. File photograph: Getty

That there are now nearly 730 consultant positions in hospitals across the country either vacant or filled in a temporary capacity is extremely troubling. There would now seem to be no doubt that the decision by the then government in autumn 2012 to cut by 30 per cent the salaries of specialists appointed after that date had the unintended, but perhaps predictable, consequence of leading to serious medical manpower difficulties down the road.

Specialist doctors are an extremely mobile workforce in heavy demand across the world. Hundreds of highly-qualifed Irish graduates have in the intervening years opted not to return after undergoing specialist training in the UK, the US, Australia, Canada and elsewhere. Many have pointed to the pay differential of up to €50,000 per year in the salaries of pre- and post-October 2012 appointees as one of the reasons for not seeking senior positions in the Irish health system.

This is not just a dispute involving medical organisations and the Government. It also directly impacts on patients. Unfilled consultant positions contribute to longer public waiting lists which now stand at record levels. There are more than 800,000 waiting for some form of healthcare, including over 600,000 who require an out-patient appointment with a specialist.

The two-tier pay system also applies elsewhere in the public service, notably teaching, and will feature highly in current talks on a new overall public service agreement. The controversy over lower pay for recent entrants has been raging now for close to a decade and it needs to be resolved.

A year ago the then government announced that in future it would only appoint consultants on a new Sláintecare contract. This would offer salaries of up to €250,000, once all financial emergency measures were removed in 2022, on condition that new appointees treated only public patients. The Covid-19 pandemic delayed these plans. However, progress is dependent on legislation and, in particular, on negotiations with medical organisations. In the meantime, patients continue to wait.