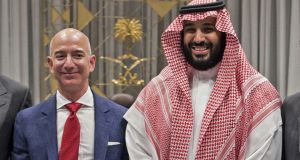 The revelations about Amazon founder Jeff Bezos and the de facto Saudi ruler Mohammed bin Salman would seem over-cooked in a Hollywood movie script. But the issues they raise are deadly serious. Photograph: Bandar al-Jaloud/AFP via Getty

The owner of one of the world’s richest companies and one of its most influential newspapers has his phone hacked after receiving a WhatsApp message apparently sent from the crown prince of Saudi Arabia’s phone. Five months later, one of that newspaper’s columnists is murdered in a gruesome attack which intelligence agencies believe was ordered by the same Saudi royal. Meanwhile, the businessman’s marriage falls apart after an American tabloid publishes intimate details about his private life.

The revelations, detailed in a UN report this week, about Amazon founder Jeff Bezos and the de facto Saudi ruler Mohammed bin Salman, would seem over-cooked in a Hollywood movie script. But the issues they raise are deadly serious. The UN’s Agnès Callamard, who found last June there was “credible evidence” that the crown prince was liable for the killing of the dissident Washington Post columnist Jamal Khashoggi, said this week she was gravely concerned by information the UN has received about the possible involvement of “MBS” in the illegal surveillance of Bezos. The information suggests the attack was done “in an effort to influence, if not silence, the Washington Post’s reporting on Saudi Arabia”, Callamard and her colleague David Kaye noted.

The case underlines our digital vulnerability in an online world where trust is a requisite but where increasingly advanced malware leave us wide open to exploitation.

The report on which the UN statement is based – a forensic analysis commissioned by Bezos – does not prove a link between Saudi Arabia and the stories that appeared in the National Inquirer. And Riyadh has dismissed the hacking claims as “absurd”. But the circumstantial evidence is strong, and the Saudi response to the Khashoggi murder in 2018 shows that the monarchy cannot be trusted to tell the truth. Not the least of the scandals here is that, 15 months after Khashoggi’s murder in the Saudi consulate in Istanbul, Mohammed bin Salman has paid no price and knows that, with continuing support from the US and his other allies, he likely never will.