Irish Times view on the judicial appointments Bill: How not to make law

But by mis-identifying the problem, the government came up with the wrong solution 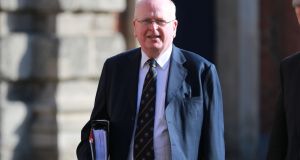 The Judicial Appointments Bill has lapsed after an 18-month a filibuster coordinated by Independent Senator Michael McDowell. Photograph: Nick Bradshaw

After its circuitous passage through the Oireachtas, the Judicial Appointments Commission Bill – a piece of draft legislation so riven by internal contradictions that even the Attorney General described it as “a dog’s dinner” – has fallen at the final hurdle.

The Government had just recently forced the Bill through the Seanad, where it had been stalled for 18 months as a result of a filibuster co-ordinated by Independent Senator Michael McDowell, but the dissolution of the 32nd Dáil means it will lapse just as it was about to be enacted.

The Bill championed by Minister for Transport Shane Ross was excellent in one respect: as a case study in how not to make law. Inspired by a vague, unsubstantiated hunch on Ross’s part – that the process by which judges are selected is rotten with judicial cronyism – Fine Gael agreed to push it through as a condition of Ross’s participation in government.

There was no research underpinning it, nor any serious analysis. The legislation was shepherded by Minister for Justice Charlie Flanagan with the enthusiasm of a hostage reading a message dictated by his captors.

The judicial appointments system needs reform. But by mis-identifying the problem, the Government came up with the wrong solution. If there is any evidence that senior judges, through their membership of the Judicial Appointments Advisory Board (JAAB), are nominating friends who are not up to the job, then someone should produce it.

What we do know is that politicians choose who sits on the bench. They do it in secret and frequently, in the lower courts in particular, they choose friends or acquaintances. Ross’s Bill would have done nothing to limit politicians’ freedom to act in that way.

The next government could amend the law so as to make the JAAB recommend three names in order of preference for each vacancy. The JAAB could be properly resourced, enabling it to interview and properly assess candidates in line with best public-service practice. These would be sensible, effective steps that would do far more than Ross’s Bill to address a real problem.