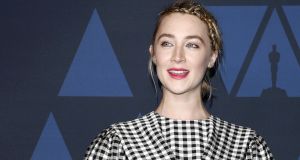 Only one other performer has managed as many Oscar nominations at a younger age than Saoirse Ronan. By this measure and a few others, Ronan already counts as the most successful Irish film actor ever. Photograph: Nina Prommer/EPA

Moments after Saoirse Ronan received her fourth Oscar nomination, Sky News identified her as British. The surge of online fury confirmed the affection in which the young actor is held at home.

No wonder. Only one other performer has managed so many nominations at a younger age (and Jennifer Lawrence beat Ronan by just four months). By this measure and a few others, she already counts as the most successful Irish film actor ever. Maureen O’Hara’s movies made more money after adjustments for inflation, but that Dubliner was never nominated by the academy. Ronan gets her fourth nod for her turn as Jo March in Greta Gerwig’s lovely take on Louisa May Alcott’s Little Women.

Her gifts as a screen actor are unmistakable: an easiness of manner that invests every line with spontaneity, a preparedness to be still when the camera demands

Still just 25, Ronan has already demonstrated longevity. She made her screen debut in 2003 on the RTÉ series The Clinic. Four years later, she held her own against Keira Knightley and James McAvoy in the adaptation of Ian McEwan’s Atonement. Ronan was nominated for her first Oscar, but lost out to Tilda Swinton for Michael Clayton.

Too many juvenile actors have stumbled after such early success. Ronan never went away, but, for a few years, she seemed doomed to small roles in hits such as The Grand Budapest Hotel and larger parts in underperforming projects. She eventually asserted her senior credentials with a second nomination for Brooklyn in 2016 and a third for Lady Bird in 2018.

Her gifts as a screen actor are unmistakable: an easiness of manner that invests every line with spontaneity, a preparedness to be still when the camera demands. She is also to be commended for the assurance with which she handles life off screen. Little gossip about romantic relationships has made it into the tabloids.

She remains superhumanly patient when American interviewers make bad jokes about the “oddness” of her forename. She can even laugh about the weird domestic obsession with her unremarkable accent. “All my family are from Dublin and I have a Dublin accent,” she told this newspaper in 2018. “I don’t know where I am from. I am just Irish.”