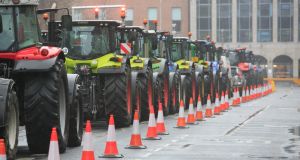 The tractor protest by farmers that caused massive disruption to traffic in Dublin last week will do nothing to improve the price of beef and has only served to frustrate and alienate the urban dwellers who are the target market for beef. Photograph: Gareth Chaney/Collins

The tractor protest by farmers that caused massive disruption to traffic in Dublin last week was pointless and counter-productive. It will do nothing to improve the price of beef and has only served to frustrate and alienate the urban-dwellers who are the target market for beef. The numbers taking part in the protest were relatively small and it was significant that neither of the big representative organisations, the Irish Farmers Association or Irish Creamery and Milk Suppliers Association, were involved.

It is understandable that beef farmers are angry and frustrated at the price they are currently getting for their cattle but disrupting the lives of their fellow citizens in Dublin will do nothing to change things. The Individual Farmers of Ireland group, which organised the protest, seems to have no clear strategy except to make life difficult for people who live in Dublin and the surrounding counties who have to commute to work by car or bus.

If farmers want to make their anxieties known to politicians they have an opportunity to address candidates during the election campaign and to vote for whoever they believe might be able to do something about their problems. Blocking traffic in Dublin helps nobody. The grievances of the beef farmers can only be addressed by negotiation with the factories and the supermarkets but even if a compromise on price can emerge, serious problems will remain. The fundamental issue is that the price of beef is currently so low not only in Ireland but across the world.

The long-term solution has to involve a shift to lower and more sustainable levels of beef production in Ireland. To be fair to the farmers they have increased production with the encouragement of State agencies. The Department of Agriculture and the various State bodies now need to engage with the responsible farming organisations to plot a new course to lower and more sustainable production levels. The country’s climate change targets require a change in farming practices and the current problems with the price of beef should focus minds on how to achieve that.