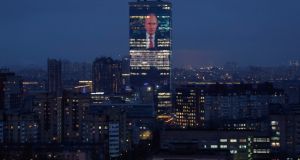 An electronic screen, installed on the facade of a business centre, shows an image of Russian president Vladimir Putin. Photograph: Anton Vaganov/Reuters

Vladimir Putin’s current term as president of Russia ends in 2024, and speculation has been rife over the future intentions of a man who has served longer in the Kremlin than any leader since Stalin. Withdrawal from public life has always seemed the least likely scenario. Putin has spent two decades building an autocratic regime with himself as a quasi-providential figure at its apex. In suppressing dissent and consolidating power around himself, he has made many enemies. To relinquish all control would not only jeopardise his mission, as he sees it – to restore Russia’s great-power status – but also leave him and his family vulnerable.

At the end of his second term as president in 2008, when constitutional term limits required him to step down, Putin’s solution was to install Dmitry Medvedev as placeholder-president until Putin could return as president in 2012. Some expected Putin to repeat that trick in 2024, but another straight swap with Medvedev, Putin’s protégé and long-time prime minister, would have been harder to pull off this time given that Medvedev and his government are so unpopular.

Another option was reportedly for Putin to take up a new post as leader of a united Russia and Belarus, but resistance from Minsk to the idea of unification scuppered the idea. Meanwhile, the most brazen form of power-grab – the abolition of presidential term limits – would have risked provoking protests and depriving Putin of the veneer of democratic legitimacy.

The country’s democracy may have been degraded on Putin's watch, but public support still counts for something

Instead, Putin has engineered an arrangement that will allow him to leave the presidency but retain control of key power-bases. In a surprise announcement last week, Putin proposed sweeping changes to the political system, notably a transfer of power from the presidency to the parliament, the prime minister and the state council, an advisory body. Shortly after Putin unveiled the plans, Medvedev and his cabinet stood down. The next head of government will be Mikhail Mishustin, an accomplished technocrat who ran the Russian tax office but, with no political power base behind him, seems unlikely to pose any threat to Putin.

The shake-up leaves Putin’s options open. He could decide to return as prime minister with enhanced powers or he could follow the example of Kazakhstan’s Nursultan Nazarbayev, who stepped down as president last year but stayed on as head of the ruling party and assumed the title of “leader of the people”.

It was striking that Putin’s political move coincided with the announcement of a spending splurge to fund free school meals, extra allowances for mothers and anti-poverty initiatives. After 20 years in power, Putin’s ratings are flagging, the economy has stalled and real incomes have been falling for half a decade. The country’s democracy may have been degraded on his watch, but public support still counts for something.