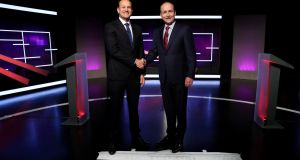 The first 10 days have been difficult for Fine Gael, as the party has been confronted with the reality of the Government’s unpopularity and the extent of voter unhappiness with its performance in areas such as health and housing. As the Irish Times/Ipsos MRBI poll demonstrated earlier this week, there is a strong mood for change in the country. This remains Fine Gael’s greatest problem.

Taoiseach Leo Varadkar has sought to blunt this threat by striking a note of humility, acknowledging his Government’s failures and pledging to accelerate the progress he says has been made in recent years. Most people will acknowledge that Varadkar has a point when he argues the State’s finances – and indeed our society – were in dire shape when Fine Gael came to power in 2011 in the wake of the EU-IMF bailout.

But they also know this was nine years ago, and wonder why progress in the areas they now identify as being most important to them has been so slow. Varadkar’s central message – that he is now in a position to use the fruits of a strong economy to improve public services, housing and the material circumstances of many citizens – is very similar to what his party said ahead of the last election in 2016, to little effect.

It is not good enough for politicians to say they have to get elected. The point of getting elected, ultimately, is to help guide the State in the years ahead

But if a mood for change has been the background to the first phase of the general election campaign, voters will soon require detail about the exact nature of that change, how it is to be delivered, how much it costs, and if it is really wise.

As the only alternative party realistically offering to lead the next government, there will be particular focus on Fianna Fáil to explain, justify and cost its proposals. But that onus will be on all parties – including Fine Gael. The rash of promises in recent days by all parties – most of them uncosted and, when it comes to the pensions issue, clearly made on the hoof – suggests there is a clear and present danger of a return to the crazy auction politics of the past.

All parties also have an obligation not just to present and cost their plans, but to say what they would do if the economy takes a sudden severe downturn, as economists warn is possible, or in the event that corporate tax receipts fall more sharply than the parties have factored in. This requires clear statements of priorities, not vague assurances that things will be alright on the night.

It is not good enough for politicians to say they have to get elected. The point of getting elected, ultimately, is to help guide the State in the years ahead. Some grievous mistakes have been made in the past and politics has been central to them. Politicians in all parties and none should remember that – and so should voters when assessing promises and weighing their options.