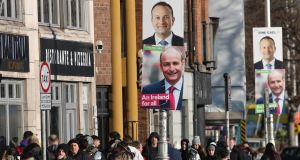 It is ominous for Fine Gael’s prospects that so few people regard the Government’s achievements in managing the economy and bringing the first part of the Brexit process to a successful conclusion as issues which will influence their vote. Photograph: Nick Bradshaw

The scale of the task facing Fine Gael in its attempt to win another term in office is reflected in the fact that health and housing are far more important issues in the minds of voters than the state of the economy, climate change or the management of Brexit, according to the Irish Times/ Ipsos MRBI poll.

It is ominous for Fine Gael’s prospects that so few people regard the Government’s achievements in managing the economy and bringing the first part of the Brexit process to a successful conclusion as issues which will influence their vote. Instead an overwhelming majority of voters are focused on health and housing, the two big areas where the Government has failed to deliver.

Whether the Opposition parties have credible solutions to these problems is open to question but a substantial majority of people are dissatisfied with the Government’s approach. All the parties are promising to spend more money to appease the discontent of voters but it is noticeable that they are shying away from proposing reforms that could alienate potential supporters.

There is a real danger that whoever ends up in government after the election will have committed themselves to a range of spending promises that could leave the economy exposed to another crash whenever the next downturn occurs. While just a tiny minority of voters see the economy as an important election issue, it is the foundation on which all else rests.

All of the parties need to spell out in more detail not simply how they intend to spend more money on health, housing and pensions but where they propose to get that money from. Equally important is how they plan to get better value for money from the vast amount of resources already being spent on our public services.

One striking feature of the poll is that so few people identify climate change as the most important issue in the election in spite of massive worldwide attention on the crisis in recent times. It suggests that persuading people to accept a steep rise in carbon taxes to help deal with the problem is not going to be easy.

The message from the poll is that people want change but the nature of that change is not clear. Only a fifth feel the Government has made progress in important areas and deserves to be given more time to get on with the job. The other four-fifths are equally divided between those who favour some change and those who believe it is time for a radical change.

The fact that so many people say they want something different is a strong indication, assuming they continue to hold to that position and act on it when they vote, that the election will result in a different government. Whether a new administration would be capable of transforming key public services while keeping the economy on track is the big question.