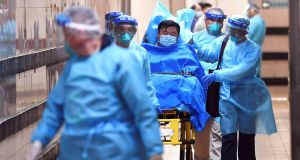 Medical staff transfer a patient of a highly suspected case of a new coronavirus at the Queen Elizabeth Hospital in Hong Kong on Tuesday. Photograph: Cnsphoto via Reuters

Despite mounting public anxiety, the World Health Organisation (WHO) has declined to declare the viral pneumonia outbreak in China a public health emergency of international concern. Such declarations are rarely made. But the WHO and China were criticised for their tardy response to Sudden Acute Respiratory Syndrome (Sars) in 2003, which led to the coronavirus behind that epidemic spreading to 37 countries, infecting more than 8,000 people and killing more than 750. The latest outbreak, which originated in the central Chinese city of Wuhan, is caused by a previously unidentified form of coronavirus, 2019-nCoV. From a family of viruses that include the one responsible for the common cold, genomic analysis of this novel version shows it is closely related to the Sars virus – meaning it has the potential to cause pneumonia and death.

The Sars virus emerged as a public health threat when it jumped from civet cats to humans. The novel coronavirus has been traced to a market in Wuhan, but the exact animal that harboured the virus and allowed it to mutate so that it became a threat to humans remains a mystery. However, an analysis of early cases suggests a third involved human to human contact.

A move to place five central Chinese cities, accounting for an area of more than 20 million people, on effective lockdown reflects the real danger of an uncontrolled outbreak being triggered by the mass movement of people associated with Chinese Lunar New Year celebrations. Further analysis involving higher numbers of patients will help answer two key questions: what is the mortality rate of 2019-nCoV, and how efficient is the virus at spreading from person to person.

As a rapidly evolving situation and with modern air travel facilitating the easy spread of infection, the current estimate that the virus poses a low risk for Ireland could change. In the meantime, the health service must be placed on high alert in order to identify and quarantine anyone who develops respiratory symptoms within 14 days of visiting central China.