The Irish Times view on hospital overcrowding: at breaking point 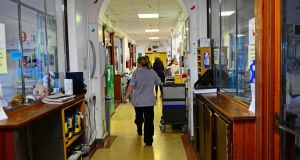 As hospital trolley numbers hit unprecedented levels for the second day in a row, hospital consultants say the situation is close to being a “national emergency”. Photograph: Eric Luke

As hospital trolley numbers hit unprecedented levels for the second day in a row, hospital consultants say the situation is close to being a “national emergency”. Some 760 people are waiting for a hospital bed – a new record. Last March saw a similar spike in numbers, prompting the activation of a national incident protocol. A similar decision now would mean stopping all non-emergency hospital admissions, elective surgery across the State being cancelled and extra bed capacity being sourced from the private sector.

While such a cessation is unlikely to exceed a couple of weeks, it would suggest a public health service that has moved, at least temporarily, from being in crisis to one that has ceased to function. And with the numbers of patients waiting for emergency admission climbing steadily throughout the year – quite apart from the current winter surge – numbers as high as those seen this week will occur more frequently. At which point a recurrent need to cancel normal hospital throughput – meaning no planned life-saving treatment for cancer or cardiac patients – would indeed point to a completely broken health service.

However, there is a lack of urgency evident at the apex of a health system which has been aware of the shortage of beds and understaffing problems for years. For example, the HSE claims to have been working on meeting this winter’s surge since last July, but its plan to bring the bulk of additional beds on stream at the end of January is unhelpful. Recent statistics point to improved population health in the Republic. Preserving these gains and protecting those in need of urgent care in 2020 requires much greater commitment from politicians and public servants alike.