The Irish Times view on Croatia’s EU presidency: A chance for growth

While Croatia is at the helm, the EU should peer through the fog of Brexit and set a bold course for future growth rather than drifting aimlessly towards decline 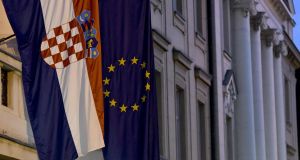 Croatian and EU flags next to each other on the building of the Croatian parliament in Zagreb. Photograph: Denis Lovrovic/AFP via Getty Images

Croatia, the newest member of the European Union, took over its presidency on January 1st, at a time when the bloc’s approach and commitment to the Balkans are once again in question. Ten countries joined the EU in 2004 and two more followed three years later, but by the time Croatia was admitted in 2013 the “big bang” of enlargement had become a whimper, and now further expansion is effectively on hold.

Brussels insists the process is continuing (albeit at glacial pace) and that Serbia and Montenegro could join by 2025, but the EU’s recent refusal even to open membership talks with North Macedonia and Albania sent a chill through the region. Macedonia changed its name to North Macedonia last year in a historic deal with Greece, facing down fierce nationalist protests to meet a key EU condition for the start of accession negotiations. But at an October summit, France, the Netherlands and Denmark declared that neither North Macedonia nor Albania was ready for membership talks, in what top EU officials described as a “historic mistake”.

There should be a renewed commitment to expansion of the EU

Such talks could last more than a decade and would involve an array of reforms, but instead of giving a reward to North Macedonia for ending a toxic Balkan stalemate, a divided EU backed away. Fearing nationalist, anti-immigration sentiment at home, French president Emmanuel Macron says enlargement should be frozen until the EU’s rules and accession process are revamped.

While reform in both areas is important, it should come alongside - not instead of - a renewed commitment to expansion that offers a real prospect of EU membership to countries that meet clear conditions. Without this, why should Serbia and Kosovo make the tough compromises needed to establish normal relations? And why would Russia and China not expand their own ambitions for a strategic region on the EU’s doorstep?

While Croatia is at the helm, the EU should peer through the fog of Brexit and set a bold course for future growth rather than drifting aimlessly towards decline.

1 Covid-19: Policy reversal means State to enter Level 5 curbs for six weeks
2 Life under Level 5: What will the next six weeks look like for Ireland?
3 Covid-19: State moves to Level 5 for six weeks with hopes of ‘meaningful’ Christmas celebrations
4 Bill that overrides UK’s Brexit deal denounced in House of Lords
5 Coronavirus: Why Level 3 failed and why Level 5 might too
Real news has value SUBSCRIBE