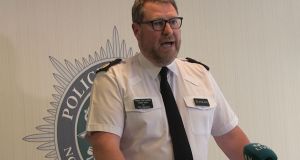 Police Service of Northern Ireland deputy chief constable Stephen Martin has said “all options” will have to be considered to address to failure of the force to recruit more Catholics. Photograph: Michael McHugh/PA Wire

The transformation of policing in Northern Ireland was one of the great achievements of the peace process. Replacing the Royal Ulster Constabulary (RUC) – a force that drew overwhelmingly from the Protestant, unionist community – with the Police Service of Northern Ireland (PSNI) was a substantive departure. Proof of that reformist intent was the 50:50 recruitment policy for the new service; from 2001 onwards, half of all new officers would be Catholics. The policy succeeded in raising Catholic representation from 8 per cent in 2001 to 30 per cent by the time the rule was ended 10 years later.

Had that rate of progress continued, Catholics today would make up 45 per cent of all serving PSNI officers. But they actually comprise 32 per cent. Progress has stalled and at the current rate it is inevitable that the Catholic composition will soon begin to fall. That’s a big problem. No police force can command public support and confidence unless is reflects the society it serves. In Northern Ireland, in a very real sense, political and social stability are intimately connected to the public standing of the police.

The political response to the situation has sadly broken down along familiar lines: Sinn Féin and the SDLP favour reinstating quotas while the Democratic Unionist Party (DUP) is against the idea. Arlene Foster is correct to say that the reasons for Catholic under-representation cannot all be solved by positive discrimination: church leaders, sporting organisations and nationalist parties have a vital role to play in encouraging young people to join. Moreover, far more must be done to recruit women and those from ethnic minorities and the LBGT community.

But the goal of representative policing is too important to ignore the success of the quota model. In a normal society, it would not be needed. But Northern Ireland is not a normal society. It is a society emerging from conflict, one where social fissures run deep. The PSNI itself, through deputy chief constable Stephen Martin, has acknowledged that “all options” must be considered. A new quota system is one of them.