The Irish Times view: Neglect of the National Archives 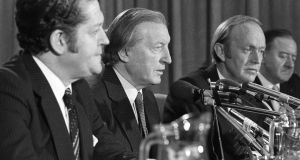 The latest release of official documents under the 30-year rule contains some fascinating information about what went on behind the scenes in government in 1989, but the fact that only two Government departments complied with their legal obligation to release files has exposed the appalling neglect of our National Archives.

Under the terms of the National Archives Act, a total of 61 government departments and State agencies are obliged to release files on an annual basis but this year, as has become the norm, only the Departments of the Taoiseach and Foreign Affairs complied. The lack of storage space and staff shortages at the National Archives are cited as the reason, but there is also a clear unwillingness on the part of many departments and agencies to comply with the law.

This makes a mockery of the Government’s stated ambition to reduce the time span for release of official documents from 30 to 20 years in line with changes in the UK. The National Archive Act was amended in 2018 to reflect changes in Britain, where a new 20-year rule is being phased in. That has resulted in papers on Anglo-Irish relations from the North and London being released years in advance of Ireland. Given that so many Government departments are unable to comply with the 30-year rule there is no prospect of the 20-year target being met soon.

The State files for 1989 show how Charles Haughey dealt with the major issues of contention in Anglo-Irish relations at that time. They also provide an insight into the level of anxiety felt by then British prime minister Margaret Thatcher at the prospect of German unity.

Haughey was horrified at the murder of Belfast solicitor Pat Finucane by loyalist paramilitaries and took a personal interest in ensuring that other lawyers in the North were given security protection. On the morning after the murder, the taoiseach instructed the Irish ambassador in London and the senior diplomat at the Irish secretariat in Belfast to convey his grave concerns about the killing to Thatcher and Northern Ireland secretary Tom King. Haughey urged an early statement from the British government making it clear that an attack on any member of the legal profession in the North because of professional actions was an attack on the system of justice.

He met Thatcher just twice in 1989 on the margins of European Council meetings. At their meeting in December the prime minister told the taoiseach of her strong opposition to the reunification of Germany following the dismantling of the Berlin Wall. She claimed that chancellor Helmut Kohl wanted to “bulldoze” Germany into seeking more territory, expressing fear this might lead to conflict and war in Europe. In the event, Haughey ignored her warnings and used the Irish presidency of the EU in 1990 to facilitate German unity.